Then we mapped the set of possible statements to true or false. The student-provided statement “ghosts are real” “blew up the machine.”

“What can we do to make this statement not blow up the machine?” I asked. The students suggested limiting what you put in the machine to things that are definitely statements, since the mathematical definition of a statement is something that can be proven true or false. “Possible statements” was too vague. In other words, the students limited the domain of the function. They also suggested adding another possible “out” value: “maybe.” In other words, they expanded the range of the function. Then we went back to the earlier mapping that turned out not actually be a function (students to pets, since some students had multiple pets). “How could we turn this into a function? The students did it by changing the rule.

We played around with more functions when we mapped students to things they like. I posited that for everything they like, they could come up with a function within that realm. I challenged the group to come up with functions for each thing, and they did with gusto. 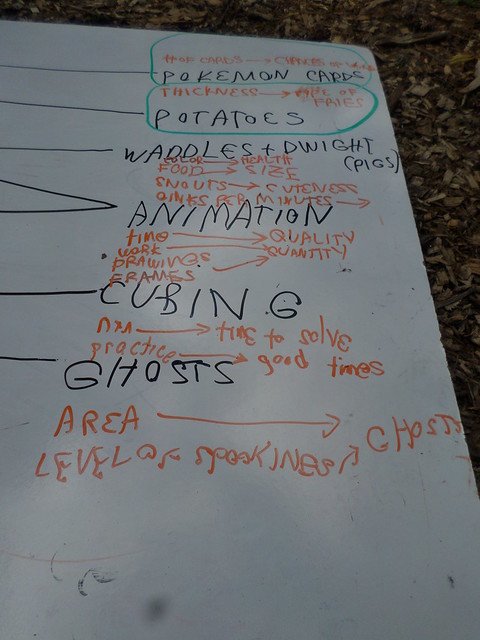 Almost half the kids not there – it was a very different atmosphere because the small group of 7 allowed for intimate conversation. We will review mapping diagrams next week so those absent can get up to speed. I plan to get the kids who were in attendance to lead that activity.
We did some other activities last week (session 2). Here’s a quick overview:
• Function machines – we revisited the Bob series (from week 1) and came up with rules to “undo” what the machines had done. In other words, found inverses.

• Modelling of functions – if you fold a paper strip in half, how many layers of paper do you have? If you fold it again, how many layers? Again? Turns out 1 fold produces 2 layers, 2 folds 4 layers, 3 in 8 out, 4 in 16 out, 5 in 32 out. (The kids counted to be sure.) Is there a pattern? Is this a function? Can you make predictions for bigger numbers? How can you be sure? 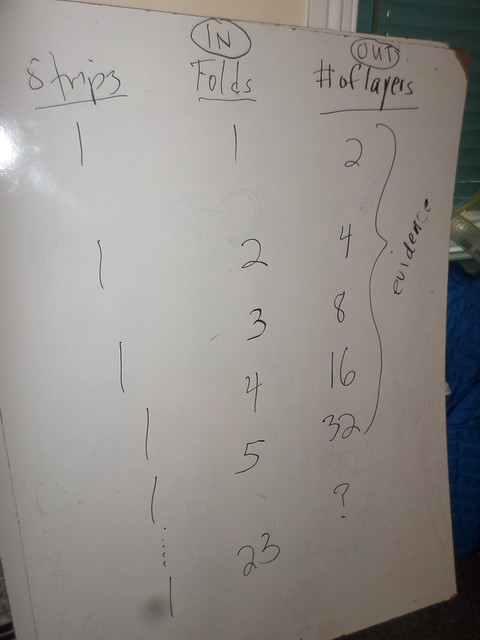 • Cutting a cake: If you make a cut in a round birthday cake that connects 2 points on the circumference, how many pieces do you get? If you connect 3 points, how many pieces? It seemed like the same pattern was emerging (consecutive “in” numbers corresponded to “out” numbers of 2, 4, 8, 16. You’d think the next would be 32 . But… when you draw it and count, you get 31. Hmmm…. What could this mean? This generated a conversation about the need for proof, including a visual proof of the commutative property of multiplication.

• Patternicity: I read aloud an article on the human need for order then we gleefully discussed this. Actually we debated it, not just discussed.
• Function machines again: I actually began session 3 with the whiteboards that had our work from paper folding and cake cutting. Then I did a function machine where you put in 1 and out comes 2, in 2 out 4, in 3 out 8, and so on up to out 256. The kids spent some time at the beginning and end trying to figure out a mathematical way to describe the rule. Their current conjecture is that it has something to do with multiplying numbers by themselves, but no one is sure what numbers or how. https://www.flickr.com/gp/talkingsticklearningcenter/YA4BA0

“When will we go back to the Recaman Sequence?” asked M at the end of session 3. Next time, first thing, I promised. (Last week it rained, this week I didn’t get there early enough to set it up.)