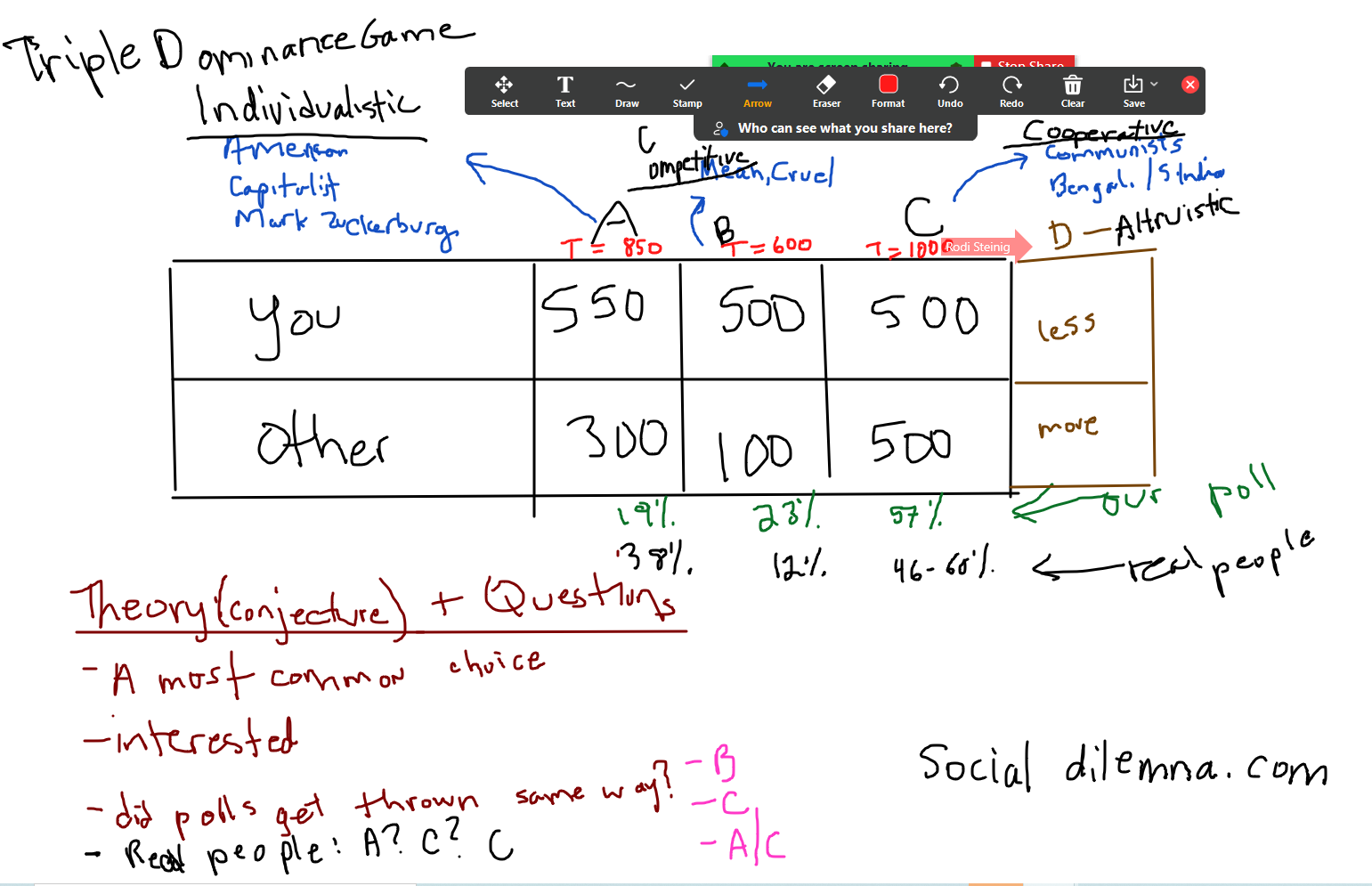 Tragedy of the Commons, Elinor Ostrom, and the Triple Dominance Game

(February 9, 2022) In this course so far, we spent weeks 1 and 2 of this working The Pirate Problem to introduce the ideas (a) that math can describe human behavior, (b) that backwards induction can be a useful problem-solving method, (c) that the math discipline of game-theory exists, and (d) that there’s a Thing called Behavioral Economics that explores whether humans behave rationally. In class 3, we explored The Prisoner’s Dilemma to discover that if humans behave “rationally,” we may choose outcomes that benefit the individual at the expense of the group. In class 4, we applied The Prisoner’s Dilemma to climate talks to (1) see how people apply mathematics to attempt to solve real-world problems and (2) debate the appropriateness of this math model.

One member of our group, O, had been a bit discouraged about humanity after last week’s discussion, so I chose some topics for today that offer hope. Sadly, O was absent today, but I decided to do these topics today anyway to keep the narrative arc of our course going.

Today, in class 5, we continued examining situations like the Prisoner’s Dilemma and Climate Talks, often called “The Tragedy of the Commons.” I delved into some math history, explaining the work of Elinor Ostrom, who won the Nobel Prize. We did a simulation of the Triple Dominance Game, which uses math to try to understand some of the psychology of human decision-making. Then we moved into another area that uses math to measure uncertainty and attempts to use math to predict human behavior: probability. Here’s how that all went:

THE TRAGEDY OF THE COMMONS

“The Tragedy of the Commons” is the conjecture that when there are collective “common pool resources” that can be depleted by individual users, humans may act like the prisoners in The Prisoner’s Dilemma; in other words the “dominant strategy” might/will be chosen at the expense of an outcome that is good for everybody and that would leave the individuals better off than the dominant strategy does. Yikes.

So the core question is this: Are common pool resources inevitably destroyed?

I gave our group some examples to lubricate their thinking: grazing lands, fisheries, and irrigation systems. The students came up with more, including

I mentioned the work of ecologist Garrett Hardin, who first coined the phrase “tragedy of the commons.” To put things into historical context, I also showed an image of him from the Southern Poverty Law Center site, to show that he is not only famous as an ecologist but also infamous as a white-nationalist extremist.  I asked, “If someone behaves badly does it mean their ideas are bad?” I also asked, as we’ve been asking over the past three weeks, does The Prisoner’s Dilemma or The Tragedy of the Commons give us reason to lose hope? Or, using more mathematical language, can the conjecture of The Tragedy of the Commons be proven or disproven?

I told students that Hardin saw only two solutions to avoiding the destruction of common pool resources. I asked the students for conjectures on what these solutions might be. The students came up with one of Hardin’s solutions: strict government regulation. Hardin’s other solution was privatization, which I briefly explained as ownership, free markets, capitalism. “But why,” asked Z, “would that solve the problem?”

“Maybe it’s a long-term solution, that would address things over a very long period of time,” replied K.

“The East India Tea Company!” argued N. The students were driving the conversation into politics and economics beyond the scope of Math Circle, so I put a world map up on the screen.

I said that Elinor Ostrom did research on this very question: Is the Tragedy of the Commons prophetic? I asked the students to mark the places where Ostrom did this research. I explained that Ostrom discovered that as long as the decision makers are physically close to the resource, the resource is not destroyed. She disproved Hardin’s conjecture! Hope! Not just a win for the good guys, but hope for the planet.

I then showed a slide with an image of Elinor Ostrim on the left and a picture of the Nobel Prize on the right. I asked, “Why do you think I’m showing you this?” The students excitedly responded that she won the Nobel Prize.

Here’s a game you play with another. You can choose how it’s scored:

Which would you choose?

Immediately the students got into a brisk debate about what people in general might choose and what their choices reveal about them. I told them nothing about anything. The consensus conjectures was that A will be the most common choice and C the next.” I gave them a link to a Google form to fill out as many times as they could.

They could fill it out however they thought people might answer and could use pseudonyms for each form. Then I set the timer and said “Go.” Here were the results:

After seeing the results, participants asked each other whether they were trying to use their responses to “throw the poll” to obtain a particular result. It turns out they were not doing this much. They were happily surprised to learn that their results mirror what studies have found, that the majority of people in our culture are probably “cooperators.” Our group likened cooperators to Communists, Bengali people, and/or South Indian people in general. These students were also relieved to learn that their simulation resulted in a larger proportion of “competitors” than studies show. Our group identified competitors as “mean” and/or “cruel.” Our group likened “individualistic” responders to “Americans,” “capitalists,” and “Mark Zuckerberg.” Our group also brought up that there could be a fourth option: getting less if you win. (Turns out that theorists identify this group as well: “altruistic.”) The students had a lively discussion about this game, which encompasses topics including decision theory versus game theory, social psychology, data collection, graphing, positing conjectures, and that most-important skill needed for mathemathics: communication. How can you share your ideas if you aren’t able to express them, right?

FYI, I learned about the Triple Dominance Game in this article in The Shuttle (scroll to page 9).

Now we had just a few minutes left.

Here’s another game you could play. It costs one ticket to play. If you win, you get 3 tickets. If you lose, nothing happens. You have a 50% chance of winning. What do you think the question is?

The students immediately knew that the question is “Should you play?” They looked at this I the way economists would:

For each question, I answered “I don’t know. You tell me.” I suggested answering the questions in a way that would make the problem the most interesting mathematically. The students then stated the following assumptions:

With only a few minutes left in class, the students decided unanimously, without a mathematical explanation, that you should play the game. (“Why not, there’s nothing else to do!”) To be continued next week.