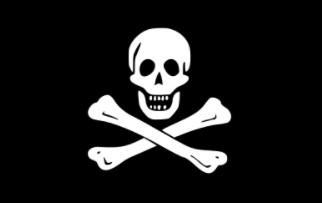 (NOTES: I will be posting reports on the Nontraditional Games and the Axioms of Mathematics sessions soon – thank you for your patience. Students are referenced below by the last or penultimate letter of their first names.)

Here are the Pirate Rules for Splitting Treasure:

What do you think the math question is here? I asked.

“It’s obvious,” said the students. “How do you divide the money?”

Yes. If you are A, what distribution should you propose? I clarified.

But these are pirates, I countered. What do you think they care about?

“They want the most money. The captain would like it all if he could.”

What else do you think they value?

From this discussion, the first two of the problem’s decision factors emerged. Then the third, and finally the fourth.

(I loved that the students were able to figure these out without me telling them. Those of you who’ve been reading these reports this academic year know that one of my personal goals in improving my pedagogy is to become even more inquiry-oriented. Hence, not telling the students the question or the decision factors.)

MAKING THE PROBLEM OUR OWN

I’ve heard versions of this problem where the “strongest” pirate proposes the distribution, or the “most senior.” Our group wanted to refer to the proposer as “the captain.” If he/she gets thrown overboard, the next one in line becomes captain.

The students named the pirates Albert, Biraj, Callie, Daniel, and Esther. By the end of the first session, however, most students were referring to them as ABCDE. The math quickly became compelling enough to let go of some of the narrative.

In game theory, the actors are rational decision makers. We had a lot of discussion about what “rational” means. The students understood it as all actors anticipating every move like a computer playing game of chess. Each actor knows everyone else’s strategies/priorities/decision factors. The students corrected each other throughout the sessions with the reminder “These pirates are robots!”

I repeatedly had trouble understanding K’s question about whether the pirates care about the future. Finally, in the second week of K clarifying this question, it dawned on me that the question is whether future treasures beyond this one are decision factors. They are not.

The students spent time both weeks discussing how the decision factor of mistrust affects the solution to the problem. I clarified that pirates will not form alliances with each other.

This problem gets pretty confusing and frustrating when you try to wrap your mind around how each pirate would vote on any distribution of five amounts, especially when you must meet all four of the decision factors. If the captain would propose that she gets 60, wouldn’t she then want to try for 61? Or 62? And so on. That’s what happened in our group – people disagreed, couldn’t justify their answers with definitive reasoning, and proposed solutions that go beyond the premises, especially the requirement of rational decision making. (A normal reaction to this problem.)

O proposed changing the problem: “Lets make one of the decision factors be who do you want to see die?” A few others liked this idea.

This is a famous problem, and many people have created variations over the years, but let’s stick to the problem as written for now, I replied. Your idea would make a really interesting problem.

“It does seem like there are a lot of politics in this problem,” observed K.

Do you know what area of mathematics this problem is? I asked the group.

Do you think it’s algebra, geometry, number theory, something else?

Do you agree that this is math? (I asked because often in Math Circles, students ask when we are going to start doing actual mathematics after we’ve been doing math for a long time.)

This is game theory. Have you ever heard of it?

“That’s not the game theory that I was thinking of,” explained O. The students then educated me that there’s an online show/game called Game Theory that’s a lot of fun.

Students continued to propose distributions and debate them. There were soon many conjectures. I was sensing a bit of frustration. I said

By looking at this board, I can tell we’ve made progress. What do you see that indicates progress?

“There are a lot of mathematical-looking things on there that are not nonsense,” posted K.

You are right, although that’s not what I was thinking. I think another sign that we made progress is that we crossed off a conjecture. In math, we learn so much from rejected conjectures. (Unfortunately I didn’t get a screen shot of this point in the work.)

“Is there a definite answer to this problem,” asked O, “or is the point of it the processing?”

There is definitely an answer, although there are a lot of Math Circle problems where the processing is the point or where it may be an unsolved problem in mathematics. I think it’s time we try another approach to the problem.

Everything people are saying has had the word “maybe” in it for a long time. And you’re starting to wonder if there even is an answer. Students found this a reasonable reason to try things another way. O proposed that each person play a pirate and answer for that character. Students tried this for a bit, but ran into the same problems.

Stop reading here if you’d like to try to figure out the problem for yourself.

Let’s see what would happen if Esther were the only pirate. What would the distribution be according to the above rules and decision factors?

What if there were only 2 pirates, Daniel and Esther?

This took a bit more work, but finally all agreed that D would get it all and E would get none, a 100-0 distribution.

What if there were 3 pirates, Callie, Daniel, and Esther?

Students proposed various distributions and then were able to reject almost all using the decision factors. Everyone agreed that the solution – the Nash equilibrium where no matter what an individual does, one can’t get a better outcome for oneself – was the C gets 99 and either D or E get 1. But which one of them gets 1 and which gets 0? Would E ever vote for getting 0? Would E always vote yes? Would D always vote no? This was the meat of the mathematical discussion. Students disagreed. Students argued. Students posited conjectures. Students defended. At one point, Z said “I’ve changed my mind.” Then we ran out of time.

At the start of class two, I put last week’s work on the board (Zoom whiteboard). I assumed that the students would continue where we left off last time. But they wanted to go back to their original method with new conjectures for 5 pirates. They ended up in same rabbit hole: if the captain can get some, could the captain get more?

I suggested we use backward induction again. Some students went along, others stuck with the original method. Students were working both methods simultaneously on the board. Lots of disagreement. What should we do? Z felt strongly that we should stick with backwards induction. (I loved that students were using this term naturally at this point.) This was met with resistance. N was adamant that the money be distributed evenly.  K adamantly stated this week and last that “pirates are not communists!” I promised N that our exploration of game theory will move into problems where cooperation is a thing.

After a lot of frustration, everyone agreed to stick with backwards induction. They worked through the possible scenarios with the decision factors and after a lot of work, concluded that with 3 pirates, the Nash equilibrium distribution for 3 pirates is 99-0-1.

Similar discussions went on when discussing the four-pirates scenario: Biraj, Callie, Daniel, and Esther. But by now, students had the hang of backwards induction, had a strong understanding of the hierarchical nature of the decision factors, and had confidence that there is a logical solution to the problem. Frustration had shifted to excitement. So they pretty quickly arrived at the conclusion that the Nash equilibrium distribution for 4 pirates is 99-0-1-0.

The students had worked hard for an hour and 25 minutes. We had 5 minutes left in class but N had to leave to get to another class. The students agreed to table finishing this problem until next week when everyone will be together. We spent the last 5 minutes guessing the rules for function machines. Today’s rules were y=4x (way too easy) and y=x^2+1 (a good challenge). We collectively decided to end every session with this activity, but with interested students presenting the functions.