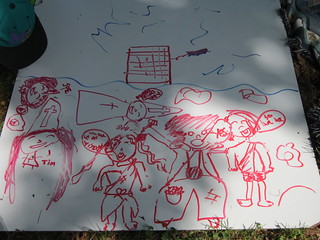 (May 19, 2015) Only R and J were there;  the rest of the kids were out sick.  We didn’t want to continue with the Dark Bridge/Unicorn problem without the others, so we tackled the famed river crossing problem Missionaries and Cannibals:  In the missionaries and cannibals problem, three missionaries and three cannibals must cross a river using a boat which can carry at most two people, under the constraint that, for both banks, if there are missionaries present on the bank, they cannot be outnumbered by cannibals (if they were, the cannibals would eat the missionaries). The boat cannot cross the river by itself with no people on board. (Wikipedia)

The students were ready to talk about a few other things at this point.  We did several proofs from  Zvonkin’s book Math from Three to Seven:

The first two were done within 2 minutes by these 9-11 year olds, unlike the much younger kids I did this with last year, who had to struggle for a while.  The third remains unproven – by these kids, the younger ones, and in the book.

We moved into a math history interlude.  I told them of George Polya.  Polya had a special interest in problem-solving methods, which we certainly need for river crossing problems!  The kids enjoyed hearing some biographical items from his childhood, such as his dislike of math due to bad teaching.  We discussed Polya’s Ten Commandments of Teaching after trying to predict them first.

The girls saw in the book I was reading from Polya’s famous “Random Walk Problem” and took it upon themselves to spend some time on that:  “In this problem one imagines a modern city with perfectly square blocks with just as many streets running east and west as north and south.  Given any one intersection as the starting point, once could move in any of four directions.  If the choice at each intersection were purely random, what is the probability of returning to the starting point?”*

As the students were forming conjectures from their diagram on the white board, they posed some interesting questions/comments about math in general:

Then we ran out of time (with no solution to Random Walk, but curiosity aroused).   One more week to go!
Rodi

**In hindsight, I realize that one thing that makes a good math question is that is deserving of a name.