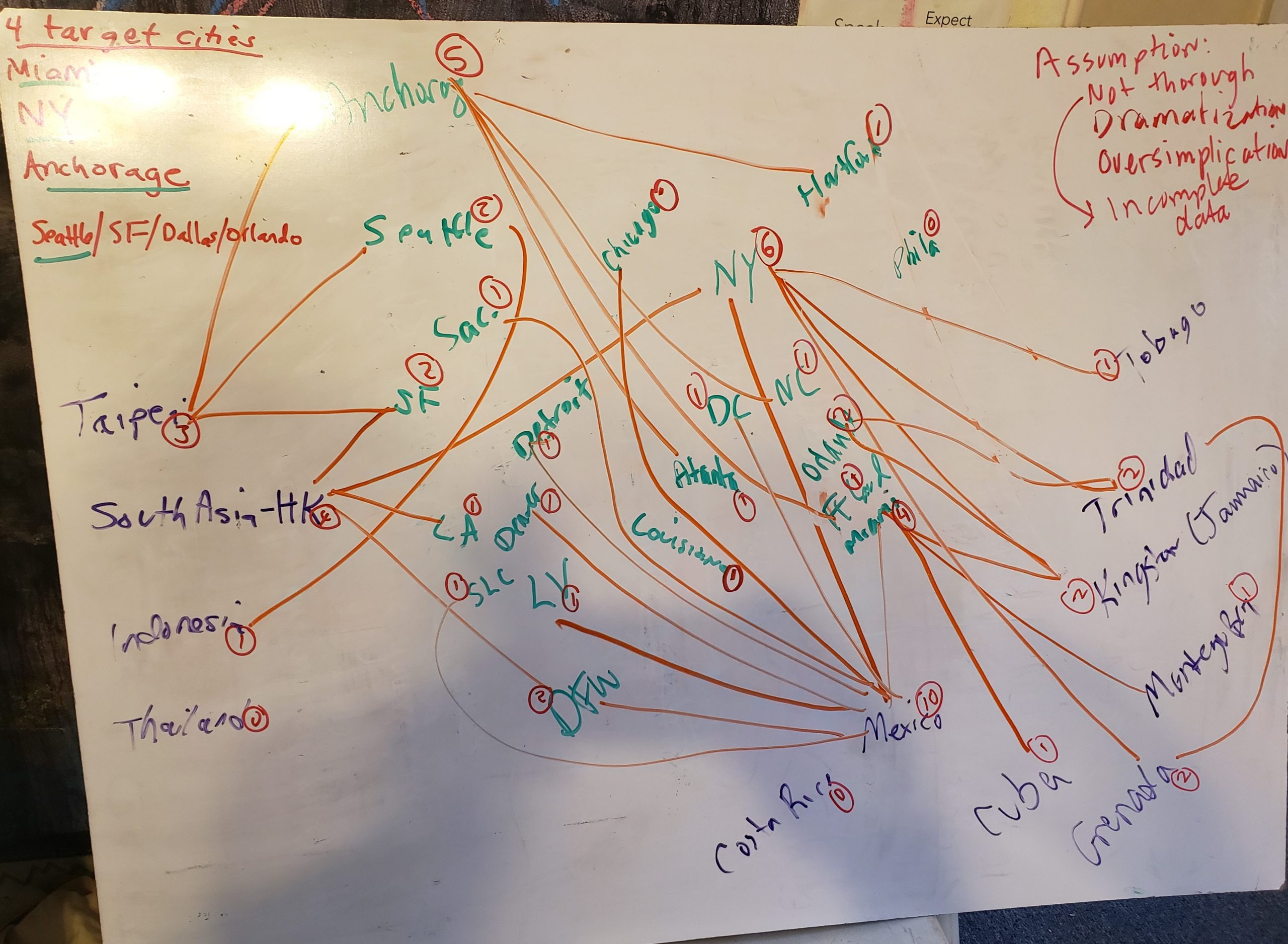 (February 20, 2020) When we designed and advertised this course (“The Mathematics of Social Change”) for teens, I didn’t expect to have a group of students who are primarily middle-school aged (11-14). I decided to stick with the plan of covering human trafficking, an important and compelling topic, with parents’ help. The day before class, I wrote to parents, who did some background work with the students in advance.* Parents, you did such a nice job preparing the students (thank you!).

On the day of the class, not everyone had arrived by class time, so I began with some other topics. “But I thought we were talking about human trafficking today,” questioned F. We soon turned out attention to that issue.

“What is that?!” asked A about the box that said “Flash Gordon” on the table. After a quick discussion about who Flash Gordon is, I explained that this Flash is a bobblehead doll, and that we were going to use his bobbling to help us focus.  “Why?” wondered the students. I explained that a focusing activity can help us bring our best to conversations about emotional topics. We then proceeded to watch Flash bobble until he stopped. He. Didn’t. Ever. Stop. So we began our conversation quietly. I gave some background statistics on human trafficking and students contributed what they know about it. I then passed around a picture of former victim and present author Zana Muhsen, explaining to students that in math and science we can get so focused on the interesting questions about a problem that we can forget that we are talking about human beings. We kept the photo of Zana in the center of the table for the whole session.

“Math can be a tool to lessen human suffering,” I said to introduce the math problem:

“How can law enforcement know where to focus their efforts to reduce or stop human trafficking in the US?”

(This lesson was first used by and published by Dr. Julie Beier of Earlham College; I did things just a little bit differently. In our course, we did not do a deep study of human trafficking before getting into the math. We did not preface the presentation of the problem with an in-depth study of graph theory; we did do the famous Konigsburg Bridge graph-theory problem several weeks before. Also, I did not instruct the students to “determine the major entry points using airline maps;” instead I hoped that the students would come up with this strategy themselves, which they mostly did.)

The students had a lot of ideas for law enforcement and the discussion moved into how the victims, who are mainly from Central America, the Caribbean, and Asia, get to the US. Once students realized to target cities with a lot of flights from those regions, I passed out airline maps. Students examined these maps (with help from parents) to create a master map. This map was essentially a graph theory graph with cities/regions as vertices and airline paths as edges. I used these mathematical terms for the rest of class. “Suppose law enforcement has enough employees to focus on just 4 cities in the US. How should they choose which ones?” M suggested (and the others agreed) that we can choose the cities with the most lines, in other words, the vertices with the most edges. In other words, we could calculate the degree of each vertex on the graph.

THE RELIABILITY OF MATH MODELLING?

Before getting to work on that calculation, students had a lot to say about the lack of accuracy on our graph. For one thing, we had only examined flights from 2 US, 2 Asian airlines, 1 Mexican, 1 Latin American, and 1 Caribbean airlines. “How many airlines are there in the US, in Asia, etc.?” wondered the students. Parents, our in-class researchers, looked this up. Not surprisingly, we had a dramatic underreporting of airlines and cities. Also, the printouts of the maps were a bit hard to read, so we couldn’t even include every flight from our 7 airlines.

“Would it be okay for law enforcement to take action based upon our data and analysis?” Absolutely not, said the students. “Before we do our mathematical analysis, then,” I explained, “we have to state and write down our assumptions.” Students stated that the graph is “not thorough,” “a dramatization,” “an oversimplification,” and based upon “incomplete data.” We were all emphatic that any conclusions were drew were just an exercise, that real-life math modelling required more thorough and more accurate data.

Finally, students were ready to calculate degree and choose the four cities to target. Three cities exceeded the others in degree: Anchorage, San Francisco, and New York City. But four cities tied for fourth place: Seattle, San Francisco, Orlando, and Dallas. “How should we choose if we are not going to complete the data with more flight maps?” Students suggested various methods. M suggested we choose Seattle based upon some other data she had seen, so we did. “Let’s suppose that you work for law enforcement in one of these cities. How could you use math to further focus your investigation beyond the airports?” I asked. Students started to discuss this a bit until a student asked “What time is it?”

It was 4:51. We had been at it since 3:30. We usually start cleaning up at 4:55. Everyone was surprised by how late it was. There was no time for further discussion or another activity.

A said, “I guess time flies when you’re having fun,” but he said it in a wistful voice. The students, who usually exit class in upbeat moods, were a bit subdued. I could see that they would probably need time to process the emotional content of this lesson. I acknowledged this and told them (and the parents present) to please talk about this more at home. I did want to end class on an upbeat note, so I told students that one activity I want to do next week is to try out another voting method, and that I want to have the puppets vote for a place to go on vacation. This (puppets!) perked people up quickly – specifically thinking about what kind of places that puppets might want to go on vacation. (So far, the students’ list includes Sesame Street, F’s house, Disneyworld, washing machine and then on top of a laundry basket, Turkey, toy shop, and Stonehenge.) F asked if he could bring someone from home (not a puppet but similar) in next week for the voting, and I said, “the more, the merrier.” I encourage all students to bring in more voters, especially since we’ve been talking the whole course about voter turnout issues!

I haven’t yet decided whether we should continue with this topic. There is a lot of deeper mathematics to explore, but OTOH we only have 2 sessions left and one student already missed this lesson. We may want to explore other topics and finish off our exploration of voting theory. Parents, let me know if you or your students have strong feelings either way.

I am filled with gratitude for the parents who helped out in class and the parents who were not able to come but trusted me to cover the topic appropriately with your children. I am grateful to have had the chance to do it.

As we were waiting for everyone to arrive, we talked about voting-theory math in this week’s news. We looked at articles about

We also did more work on the 4-color theorem. Students tried to color M’s map that previously seemed to require 5 colors. This time they did it quickly in 4. We discussed whether there is an optimal strategy to do the work on this problem. (M started with one color and colored every region possible with that color before switching to a different color. F started with one region and colored every adjacent region before moving to a different region.) I asked again whether any maps require more than 5 colors, or could these 4-color maps be done in 3.  “Are you going to tell us the answer?” asked F. (I didn’t promise, but I probably will at the last session. I don’t usually do this, but mathematicians required a computer to solve this one.)

*For anyone who didn’t see it, here is my pre-class email to parents:

As you know from reading the course description of our current course, one of our topics is human trafficking. Tomorrow we will begin our mathematical exploration of this topic. The math involves graph theory, mathematical modelling, and data analysis. To give the mathematics some context, we will talk for a short bit about what human trafficking is.

I am using a module that is used in a course at Earlham College, described in the book “Mathematics for Social Justice: Resources for the College Classroom.” I will not be doing the background/contextual studies that a college class would. In the book, Dr. Julie Beier of Earlham suggests supporting students for the emotional content by “setting classroom guidelines for discussion, practice with less intense topics, and starting with silence to encourage students to bring their best self to a conversation.” She also recommends that instructors “explain the purpose of silence” and to encourage students “to make a list of their reactions.” We have already been doing the first two suggestions and plan to do the others as well. I do plan to start with a totally secular focusing activity – probably a bobblehead doll. I would like to invite any of you to sit in for the topic introduction, and to email or call me with any questions or concerns up front.

The background that I will introduce is from the UN Office of Drugs and Crime (UNODC):

There is not much more known or studied about this problem, and beyond these statistics and information about the logistics of how the transport of victims works, I do not plan to delve into background. Students will, of course, have questions. (Ellen, you will of course use your judgement about which questions to research in class and which to defer to outside study.)

I STRONGLY encourage you to talk with your students in advance about this if you suspect your student will have an emotional reaction to hearing this information for the first time.

Also, feel free to respond to this email (reply to all, please) or call/text me with any other questions or concerns.