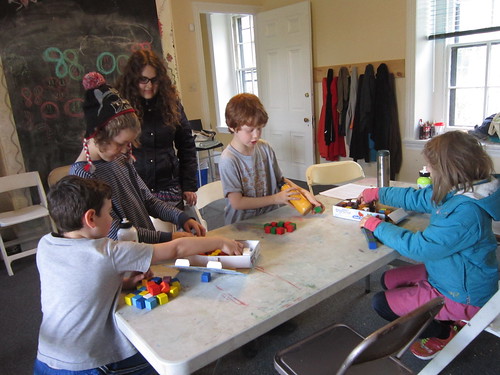 (April 7, 2016) Remember my report on last week’s session, my thoughts about the nexus of pedagogy, kid behavior, and older kids helping?  This week put all those conjectures to a real test.

We began with 11-year-old J facilitating a problem-solving discussion on our ongoing logic problem The Very Clever Prince.  All four kids contributed excellent conjectures that moved the group closer to a solution that meets the requirements of the problem.  J did a nice job acknowledging this.  After about five minutes, though, there was some tension in the group as L produced conjecture after conjecture with great enthusiasm, B repeatedly pointed out how L’s conjectures slightly violated the premises of the problem,  S expressed frustration at not having arrived at the solution yet after all these weeks, and M taking in and processing these various points of view.  “What are you going to do if we don’t solve it next week?” asked S, knowing that next week is our last session.  “I think you will solve it next week,” I said to the group truthfully.  I dodged the issue but S has a valid concern.  What will I do?  It’s clear that the others do not want to be told the solution.  At the same time, I don’t want frustration to cause anyone to get discouraged about math.

If it’s challenging for me to juggle these different levels of interest and emotion, imagine how hard it was hard for helper J to manage.  She was frustrated, so I jumped in and redirected the group.  This was unfortunate for L who I suspect could work on this type of problem all day without tire, but fortunate for everyone else who wanted a break from it.  I asked my helper R facilitate the next activity.

“VICKY AND HER FRIENDS”

R sat with the kids on the floor.  Before she had a chance to state the math problem, three kids pulled their arms out of their sleeves and started rolling around on the floor – turtles again like last week.  “Let’s sit at the table,” she said.  Everyone moved and she read the problem aloud to the kids:

“Vicky and her friends sit in a circle.  It turns out that both neighbors of each child are of the same gender.  If there are 5 boys in the circle, how many girls are there?”* Immediately B answered, “Five!” Both R and I were taken aback, as this problem doesn’t seem to have an obvious solution to us, but five is a solution.  In math circle tradition, we asked for an explanation and proof.  “Well,” said B, “you said five, so I thought five was a good guess.”  First of all, revealing – this is one way students do tend to come up with answers in math.  Second of all, phew – R did have something to talk about with the group.  They talked about how the problem could be figured out.  She asked if they’d like to model it with blocks, and passed out some colored wooden cubes for experimentation.  M and S set to work on the problem.  B and L set to work creating mathematical art.  The artists were putting most of their attention on the art and a tiny bit on the “Vicky” problem.  Their work with the blocks was math too – exploring symmetry and creating tessellations as they each created a person.

M and S came up with a solution to the Vicky problem and began exploring it from other mathematical perspectives.  What happens if there are 6 boys?  Are there any solutions where the number of girls doesn’t equal the number of girls?  And so on.  Meanwhile, the artists lost focus of the math and became competitive in their creations.  Things got loud.  One complained to me about the other (an artistic transgression that involved what we used to call “bathroom talk” when I taught preschool years ago).  At this point my helper R withdrew from facilitating into exploring the problem on her own.  I said something to the arguing kids.  Somehow everyone was focused on the original problem again.  All four students agreed that you must have an equal number of girls and boys to solve the problem.  They were ready to move on.

“No you don’t have to have an equal number,” said Rachel.  “I think I found another solution.”  The 16-year-old helper had become a participant in a circle for eight-year-olds.  She had everyone’s attention.  “Look,” she said, pointing to her circle of blocks.  “You can have them all be the same.  The problem doesn’t say that the neighboring students have to be the opposite gender.”  She was right.  She had realized an assumption that wasn’t necessarily true.  The kids were impressed.

“Can we go outside?” someone asked, remember their game of tag during the break last week.  I remembered that too, probably not in the same way.  I said sure, that we’ll play the crossing the river game with the jump rope (formally called Treasure Hunting*).”

How to focus these kids on this game?  Hmm…  They did remember it – if your campsite is on one side of the river and you have to cross it seven times while you’re hunting for treasure, do you end up on your campground side of the river, or the far side?  Last time we played, several kids ran away with the jump rope (our prop representing the river).   I laid the it on the ground, and asked everyone to come to one side to work on the problem.  M came.  The rest wanted to either run away with the jump rope and/or play tag.  What to do?  I did four things that made the game work:

While all of this was going on, my helper J asked to help facilitate this activity.  It was helpful to have someone give instructions, ask for predictions, and generally herd the kids.  Within one round, though, she too was calling out conjectures.  I had to shush her numerous times.  I shushed her with a smile and a wink, of course.  The temptation is for everyone to want to solve interesting math problems.  We all have that architectural instinct, that instinct that seeks patterns, makes predictions, makes sense of the world.  It’s really hard not to become a participant when you’re in the room.  I’ve seen this happen with parents too.

Also, it’s worth pointing out that during this session, no one was so unfocused to the point of needing a break from the class.  The challenge was on me to facilitate it well.  Everyone was super-excited about the math just about every moment, as is usual for this group.  I have to just remind myself to let the kids own it, have fun, involve movement, and break into storytelling when needed.

We went inside.  “Can we play nim?” someone asked.  That was my plan.  (If it hadn’t been, I would have made it my new plan to continue to give the kids ownership.)  The group grabbed the jar of stones and got overly enthusiastic in setting up the game.

I said, “I’m going to take these and set them up,” or something like that.

“I am bad.  And I’m going to beat you,” I challenged.  This got the kids very, very excited.  I had never challenged them like this before.

“We’re going to beat you,” they immediately replied, and the game began, me against all of them.  They did beat me.

“I deserve a rematch so I can beat you, right?”  They all agreed that poor, poor bad player me deserved another chance.  M decided to join my team.  “Are you sure?” I asked.  “You see how I play.”  She was sure.  This made things very interesting, as M and I eavesdropped on the other team’s strategy whispers and they eavesdropped on ours.  These strategy whispers were serious mathematical conversations.  This time I won (with M’s help).  We were all in an intense discussion about how many piles and how many stones were needed to assure a win when we ran out of time.  To be continued next week.

*From my constant source of material for this circle – the “Playing with Parity” math circle from Julia Brodsky and her colleagues, http://www.mathcircles.org/content/playing-parity.