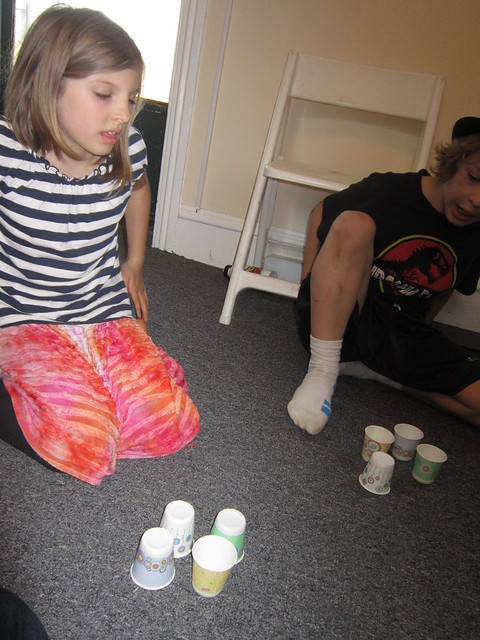 (March 24, 2016)  The kids got right to the business at hand, no introductions necessary:  NIM.  They chose teams.  The experimented with strategies.  They changed their teams (multiple times).  After about six games, some strategy emerged.  “We should have taken two,” said S at one point.

I gave each student 4 paper cups:  three upside-down and one right-side up.  “Can you get them all in the same direction by flipping exactly two cups at once?”  The kids got to work.

“It’s impossible,” said S pretty early on.  (Earlier in the class, before this activity, one of the students had posited the conjecture that “nothing in math is impossible.”)

“It is possible,” said L.  M and B were not sure.  L demonstrated various ways he thought it was possible.  M, B, and S questioned each of his methods.  With each question, the math got deeper, to the point where the kids’ questions were really about exploring equivalency:

They could have spent a lot more time on this, but with eight-year-olds sometimes things fall apart suddenly and unexpectedly, so I decided to quit while I was ahead.  (We’ll return to this activity on another day.)  I was so excited to see such deep thinking coming from the kids.  I said almost nothing during this game other than facilitating the kids taking turns for their demonstations.  I read a post recently on a math education listserv that seemed to imply that there isn’t much deep mathematical thinking going on with this age group, but I so beg to differ!

“Have you ever played Rock, Paper, Scissors?” I asked the students, who had decided to move class outside at this point.
“Are you kidding?” replied one of the kids, incensed at my ignorance of the group’s sophistication.

I quickly covered for myself by saying, “Yes, but how about Math Rock Paper Scissors?”  This got their interest.  “Do you know what multiplication is?”  One knew this term, but the rest didn’t.  Once I explained it in terms of “sets of” they knew what I meant.

“Times tables!” said M and S.  I asked M to help me demonstrate this game, even though she had no idea what the game was.

“So after saying ready set shoot, you hold out fingers – 1, 2, 3, 4, or 5.  We multiply your number of fingers by my number, and if the product is even you win, and if it’s odd I win.”  I played a round of this with each child.  They had fun, but were getting antsy because of the beautiful spring day, and no one could focus on any strategy.  I decided to move the group inside for a new activity.  Now I know that Fingers Multiplication is a better game for indoors.

They asked to repeat “the game when you turn your back” and “the game with the jump rope” from last week.  I thought we needed something that would grab 100% of their attention immediately, so I told them that we will return to those another day too.  “Now, though, I want to revisit a problem that some of you have struggled with before.”

“Once upon a time a princess wanted to marry a prince.  Her father the king was opposed.  He told the prince, ‘I am going to write Life on a card and Death on a card and turn them face down.  Tomorrow you are to randomly choose one.  If you choose the Death card you will die, but if you choose the Life card you may marry my daughter.’  That night, the king secretly had the cards changed, so that they both read ‘Death.’  The princess was spying and saw it happen.  She alerted the prince, who was clever enough to devise a strategy that succeeded in him marrying the princess.  What did he do?”

We had spent a LOT of time on this problem in the prior math circles.   The kids asked question after question, forming conjecture after conjecture.  I congratulated them on their wonderful ideas, but had to tell them that sadly their ideas were not the same ideas that the prince used, that somehow his idea involved mathematical thinking.  Toward the end of their work on this (probably 10-15 minutes) they were getting closer to mathematical (versus physical/technological) solutions.  “Can’t you just tell us the answer?” pleaded S several times.

“I don’t want to reveal the answer since B and L have been working toward the solution for  two years and M for one.  I want you all to have the fun of figuring it out for yourselves.”  It seemed that B and L agreed with me.  (Both had asked me about it a number of times outside of math circle.)

M had a confession to make, though.  With a smile she said, “I heard the problem last year, but I actually didn’t work on it outside of math circle.”  I reassured her that there is no expectation of working on these problems independently.

“But tell me this,” said S (or maybe B?).  “Do you know the answer?”  I assured them that I do, even though sometimes I give problems that I don’t know the answer to or are unsolved.  I was delighted that it did occur to these kids that I might not know the answer to something.  I mention these comments about “the answer” because it’s interesting to notice how kids’ thinking evolves in math circles.  My experience is that kids come into math circle expecting the teacher to know The Answer, believing that there is One Answer, and that if the going gets tough the teacher will reveal The Answer.  It is so exciting to see how quickly these notions can be disabused.