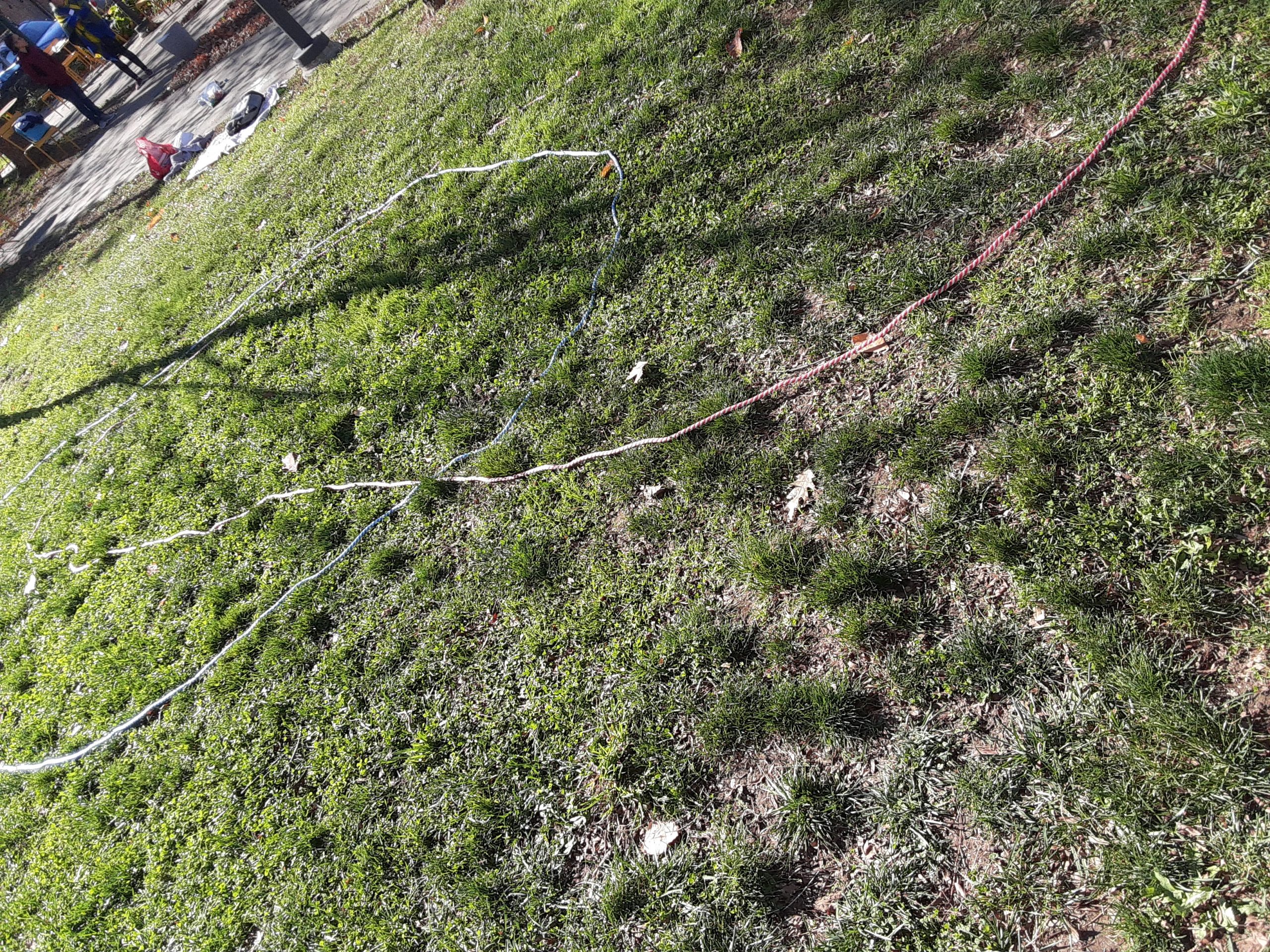 (November 9, 2022) “Could you empty out that backpack for me?” I asked Z and V, students who had arrived a few minutes early. It was our first session of the course “Axiomatic Set Theory” for students ages 7-9.

They pulled out a bag of two large coiled ropes. “Do you want to untangle them and set them in the grass in large circles?”

Now everyone had arrived and was curious about what we would do with these rope circles. “Let’s make one circle represent yes and one represent no.”

“The red should be no,” said N. Everyone agreed.

“Okay. So stand in the blue circle if you agree with the statement and the red if you don’t. Here we go. First statement: I LIKE DOGS.”

Most students ran into one circle or the other. But two stood outside. They said, “What if the answer is yes and no, like sometimes I like dogs and sometimes I don’t?”

“Hmmmm…. I need to make a better statement. Here’s one: I LIKE TO EAT PIZZA FOR BREAKFAST.” This one worked a bit better – only one student remained outside of the circles. And we had an interesting short discussion about the distinction between actually HAVING pizza for breakfast and LIKING pizza for breakfast.

“I’M TALLER THAN A T-REX.” Most found the “no” circle but several didn’t know. “How would you know?” they asked.

“I CAN SWIM.” Bouncing back and forth – does doggie paddling count?
“I CAN DOGGIE PADDLE.” Better.

“I CAN SPEAK ANOTHER LANGUAGE.” Not so good – what if I’m starting to study another language?

“I LIKE WHAT A WHALE’S SKIN FEELS LIKE.” This was interesting. Two students went into the “yes” circle and the other four stayed outside the circles. Yes, the students in the “yes” circle had felt a whale’s skin! The others realized that if they don’t know, don’t automatically say no.

“I AM TIRED.” Lots of running from circle to circle, indecision, questions, confusion.

“Boy, I did not design this game very well. It’s not working. Hmmmmmmm…. I have a better idea! Let’s change what the circles represent! Maybe Yes and No are bad categories. New instruction: GO IN THE RED CIRCLE IF YOU LIKE SOCCER AND THE BLUE IF YOU LIKE TENNIS.”

“My dad likes tennis but I never tried it – I guess I’ll choose tennis,” said Z.

Amidst lots of laughter and hard thinking that was going on since we began the game, I announced excitedly, “Okay, I’ve finally figured it out! I finally have the statement that will make the circles work the way they should: RED IF YOU LIKE DOGS AND BLUE IF YOU LIKE CATS!”

“But what if I like both and like dogs more than cats? I think I’ll go in red,” said L.

“Hmmmm,” I said, “would it be better if I give a few statements that might not involve liking something more?” (In other words, does degree matter in Venn Diagrams? The students were divided on how to design this system.)

Okay, hmmmm, try this one: RED IF YOU LIKE TO EAT MAC N’ CHEESE AND BLUE IF YOU LIKE TO EAT SAND.” At first this seemed pretty straightforward. Five people went into red and one person went into blue. (N confirmed, after questioning, that yes, he does like to eat sand and does not like mac n’cheese.) Students questioned the problem again. But what if you like both? What if you like one more than the other?

“Ugh. Maybe this statement will be easier then: RED IF YOU HAVE A HEAD AND BLUE IF YOU HAVE FEET.”

The students now came up with the idea to move the ropes again to form a region of overlap (the intersection of the sets in a Venn Diagram, in formal set theory language). Students convinced each other to stand in the intersection, although one student went in grudgingly (wondering about alternative definitions of “have,” “head,” “you,” and “feet,” spoken like a true mathematician), after stating “I don’t like committing.” Peer pressure is alive and well in mathematics. It takes courage to go against the group.

RED IF YOU LIKE HAVING A HEAD AND BLUE IF YOU LIKE HAVING FEET.” This generated a brief discussion on the pros and cons of having heads and feet. (I hadn’t realized there were any cons! I always do learn a lot from the participants, who have the benefit of youth and therefore less biased assumptions about how the world works.)

Here’s another one: RED IF YOU LIKE GETTING STUNG BY A BEE AND BLUE IF YOU LIKE GETTING STUNG BY A WASP.” Young people started running into circles but then all abruptly slammed on their brakes and looked at each other. “What if I don’t like either?” They slowly stepped outside of all regions. They realized that there can be elements of the universal set (students in this class) who are not elements of either designated set (like bee stings or like wasp stings).

“Excuse me, Rodi, are we going to do any other games today?” asked someone. They were having fun, but also were wondering if there’s more fun on the agenda after 30 minutes of Venn Diagrams. I told them that I had a lot of other activities that we could move to. The students decided to try some other things, but that next week continue this to devise a definitive system that includes a separate set for the answer “I don’t know.”

My goal for this course is that every activity we do contains elements of set theory, axioms of mathematics, and/or, of course, proof. We may these things together by the last session. Or we may not, depending upon student interest.

I asked students to prove or disprove the following statements (written by Zvonkin):

“I see with my ears and hear with my eyes.”
“The sun is closer to the earth than are the clouds.”

I laid down a line of colored blocks. What’s the next one? Everyone said “brown.” Nope, that’s not it. Then I put down more. Eventually the students got it, but the big underlying question is how can you prove it’s a pattern? TBD.

Students attempted the activity “Make 37.” There are a bunch of numbers in bags. Can you take numbers out of each bag so that you can make 37?

I instructed V, D, and L on how to draw it on the ground in sidewalk chalk, and they all got to work. Some did mental math. Some started adding with chalk. U realized that there were too many of some numbers in the bags so started crossing off the extras. (In other words, since 5×9=45, you need fewer than five 9s.) At one point, I reminded students that the question is “Can it be done,” not “How do you do it?”
“That changes everything,” said U, who had a conjecture.

We were running out of time, so I handed out printouts of the problem to continue at home for those who were interested.

“Excuse me, Rodi,” said V. “Why does this paper have a bag of fives but you told L to draw nines? There are no fives here.”

“Oh no,” I groaned, “I told the problem wrong! You are right, the bags are supposed to be full of 1s, 3s, 5s, and 7s, NOT 1s, 3s, 7s, and 9s! Do you want to try it again with the right numbers? A few did, but most were happy continuing with the numbers they started with.

As we finished up and cleaned up, I asked students whether zero is a number and to prove or disprove it. Also, I showed a mathematical “magic” trick with my fingers. V and N were still trying to Make 37 as we were leaving.

This Venn diagram activity evolved from initial activities suggested in a Natural Math book (I can’t remember which one) and also Zvonkin’s Math from Three to Seven.

My apparent feeblemindedness today produced so much joy in students! I witnessed this “feeblemindedness pedagogy” in the work of the late Bob Kaplan. Bob gave me the confidence to transfer this approach that I formerly used in teaching preschool years ago to mathematics. Specifically the confidence to not let the trope of gravitas conventionally connected to mathematics hold us back from true exploration, discovery, invention, and joy