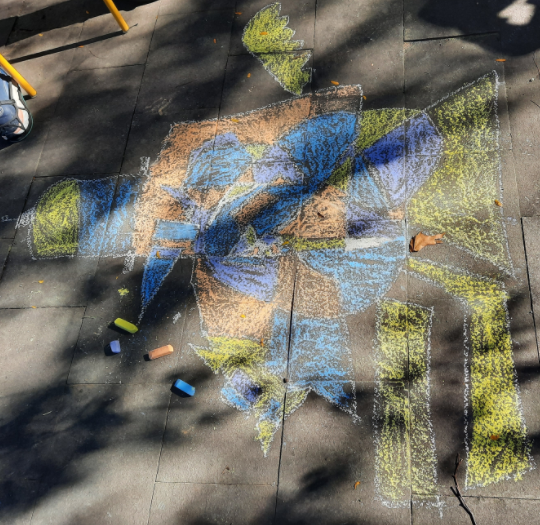 Me: Finish creating a map of your country, with regions. There’s only one restriction:  each region needs to be enclosed.

S: “Are we going to name the regions?”

Me: After class, if you want. Let’s take a day off from talking about axioms and strange loops, and celeberate Martin Gardner’s Birthday.

I told a bit of his history – his love of puzzles, magic, jokes – how he is considered by many the founder of the field Recreational Mathematics, the G4G Gathering, the G4G Celebration of Mind events. Then the students took turns adding regions to the map. “It looks like a bird.” “We should call it Bird Country.” “No, it looks like a ….”  Soon each student on their turn was adding a region to make the map look like a certain thing, but each student wanted it to look like something different. Finally it was done. For now.

Me: One math problem Martin Gardner had a part in the story of is map coloring. Can one of you color in a region? (Done.) Now someone else color another region. See if you can color the whole map with just 2 colors. One rule: no two adjacent regions can share a color. In other words, the same color can touch a vertex but not an edge/border. Can you do it with only 2 colors?

Student conjecture: “No, unless we change the map.” They posited a 3-color conjecture (that they could color the map in 3 colors only, following the rule).

Students took turns coloring, all standing around the map (while social distancing), with me pretty much saying my favorite thing: nothing. Students were coaching each other on where to color and which color to use. They quickly rejected their 3-color conjecture and posited a 4-color conjecture. A, R, and G added some additional regions to continue making the map look like “a bird” … or “someone doing magic with a cupcake on top of their head” … or “a top hat on top.” S asked questions about the mathematics and the history.

S: Do you have a picture of the map that MG drew?

Me: I do! I handed out copies of the McGregor map.

Students looked at the map, came up with their own conjectures, and asked “But was he right?”

Me: I’m not going to say, since you may want to take these home and have some fun trying to figure it out yourself. I will tell you one thing (imagine suspenseful music here): He published this map on April Fool’s Day.

Me: Yes, maybe he was pulling an Epiminedes on everyone! (The students by now knew that Epiminedes was known for using lies to make points.)

G: “So many math names end in ‘edes!” There’s Archimedes, and others.”

I got up on my metaphorical soapbox and explained that it’s just the Western European mathematicians who have names that may sound similar that have gotten the most attention. There have been mathematicians from Asia, Africa, and other places doing amazing work for several thousand years. But in our culture, we haven’t been taught as much about them. I promised to tell of some of these mathematicians at some point. Back to map coloring…

I left the McGregor map question without an answer. Some students wanted to work on it at home. I did explain that this was the first famous math problem “solved” by a computer that was convincing to humans.

Me: Can you change your own map so that it would would need 5 colors to color it?

Students: Yes! (They drew a line segment splitting one of the regions into two.)

Me: Could you color this revised map with 4 colors if you had used a different coloring strategy from the start?

I encouraged students to try making maps at home that would require more than 4 colors.

[SPOILER: I called this problem the “Four-Color Conjecture.” I did not call it the Four-Color Theorem, which it is now called, since for a conjecture to become a theorem, as these students know, it has to be proved. I didn’t want them to know it was proven so that they could work on it more themselves at home if desired.]

By the end of class, students were using math vocabulary including theorem, conjecture, edge, and vertex with ease. The students asked me to go home and print out copies a photo of their map and bring it back next time. They requested that I cut the map out in a circle and not a rectangle so that everyone could choose their own orientation for the map. There was no consensus on which part was the top. As they left, students discussed making a coloring-book with map-coloring challenges and also coming back next week to work together on naming the regions on the map they created today.

If a meta-analysis is an analysis of analyses, and metacognition is cognition about cognition (in other words, thinking about thinking), then meta-pedagogy must be pedagogy about pedagogy. At the start of class today, S asked “Why are you asking us to draw the regions instead of you drawing the regions yourself?” Other students asked similar questions about why I was facilitating Math Circle in the manner that I was that day. I explained the pedagogy of our Math Circle, which is basically that the students are the ones who are supposed to be doing all the thinking, and I’m only supposed to be asking questions or providing interesting math problems. I also explained the benefits of doing it this way.

Blogging about blogging: this paragraph is for those of you who also write blogs or reports about your work with students. What practices aid in your being a reliable historian? Each time I lead a Math Circle, I do a brain dump that same day with details that catch my fancy and that I want to share with parents. Then I go back into the document later and fill in the important context. I did a brain dump on October 19 and have been thinking about meta-pedagogy a lot since then. On November 13 I sat down to fill in the context. I opened up the document and saw that under “meta-pedagogy” I had written “see note in pants pocket.” Ugh. Of course those pants have been through the wash a few times in the past 3 weeks. How do you quickly collect your anecdotes and quotes if you write later? I’d like to know.

Why do I write these blogs/reports?

After we talked about the math names that end in ‘edes, G asked what Archimedes was famous for in mathematics. At the time, I had forgotten, but promised to refresh my memory and report back next week. I never did remember to do this. Here are a few Archimedes items I’ve discussed with students in Math Circles over the years:

He did a lot more. If you type “Archimedes math contributions” into a search engine, you’ll find a lot of material, including some animated videos.

Many thanks to A’s grownup B for the great map photo, and to R’s grownup N for action shots over the weeks.