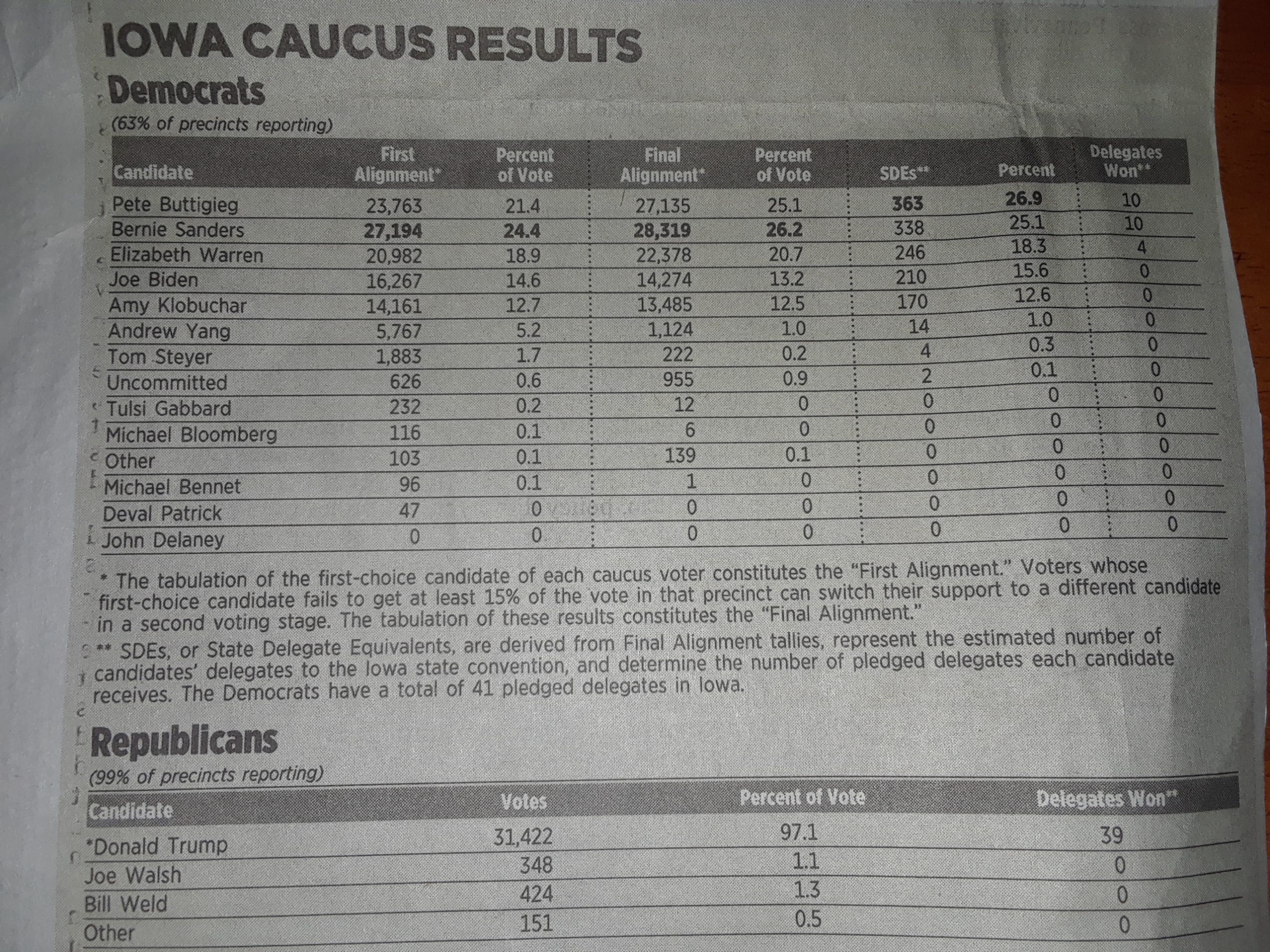 (February 5, 2020) “Suppose there was an election for Official Ice Cream Flavor of the USA, and the choices were ravioli, mint chocolate chip, butter pecan, mango, vanilla, and chocolate. Which voting methods could be used?” So began our class, which was filled with debate, questions, and conjectures as I posed more questions.

“Suppose the country votes state by state on different days; we are in Hawaii; and actual state preferences are ravioli 1%, mint chocolate chip 12%, butter pecan 12%, mango 40%, vanilla 20%, and chocolate 15%. What voting method would each flavor lobby want?”

“Suppose there was a caucus with low turnout, a pushy person there advocating for butter pecan, and a required tasting session first. What would happen and what would be the implications?”

I asked these questions to facilitate evaluation of the Iowa Caucus, which took place 2 days before our session. Students brought up important issues, explored possible outcomes, and moved the conversation in some unexpected, interesting directions such as the population of Hawaii, mosquito control, and how percents work. They also came up with some novel voting methods. A had a lot of questions about how percents and percent change are calculated. In response to his question “Is it possible to have percents that are over 100%?” M came up with some examples involving mosquitoes. For instance, “The mosquito population increased by 200 percent.”  “What does it mean to have minus 200 percent?” asked someone. We made up some examples with mosquito population changing over time to illustrate the calculation. Then F asked, “Why are there only 10 mosquitoes in the whole world?”

“Because this is math!” I replied. “We can make up anything we want within a system as long as we follow a consistent set of rules within that system.” We also talked about, as we have before, how the math itself can become clearer with easier examples.

Students also pointed out that mosquito growth isn’t linear, it’s probably exponential. Again, though, we can imagine it to work how we want it to work since this is math and our goal is precision and logic. We looked at a map of results by county. “Would it be fairer if the delegates were elected proportionally to county instead of proportional to population?” All of the students were adamant that this was a terribly unfair idea. My helper Ellen and I told them that it has been and is done this way in some circumstances in the USA. Could the students guess where? J knew that the electoral college had some geographic issues built into it, but everyone was pretty skeptical of the concept of how representation is done in the Senate. Another issue that came up is how Iowa can influence the entire electorate while not necessarily representing the entire electorate in terms of various demographics. I accidentally presented an oversimplified version this famous problem. When I posed the question, I forgot that you have to start and end on the same side. Students made fast work of it, testing it first using an actual map and then using a graph theory map. They definitely preferred exploring the problem using graph theory, coming up with the conjectures that it is impossible to cross all the bridges once with 7 bridges in this position but possible with 5, 6, and 8. This being math, the most important questions were “Why?” and “Can you prove it?” I asked “Is it possible with 117 bridges.” The working conjectures at this point are yes if you move the bridges so that they are all parallel and no if you keep them where they are because there is an odd number. To be continued next week, with the correct problem. TO EXTEND AT HOME FOR THOSE WHO DESIRE:

See you next week!
Rodi