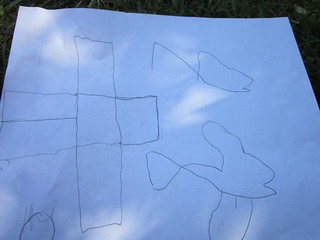 (May 24, 2015)  It was a melancholy day – the last math circle of the year, and also (for those who attend the Day Program) the last day of Talking Stick.  As students slowly trickled in, we warmed up by attempting two of Martin Gardner’s line drawing challenges:  The Fish and The Robot.1  The task is to draw each in a continuous line that does not cross itself.  While working, we discussed how these are math.

Next I gave everyone a bookmark with the at-the-time current version of The National Math Circle Pledge2:  “I solemnly swear that if I already know the answer to the math problem I will not yell it out loud so those around me can experience the joy of learning.”

“This is not because I think you will yell out answers,” I explained to this very polite group.  “It’s for you to invoke in other classes you might be in where people do yell out answers before everyone has a chance to think.”

“Cool,” replied at least one person.

Then we were finally ready to revisit the Dark Bridge “unicorn”3 problem.  Some of the students were excited to work on it, but others had become discouraged, particularly those who had been a math circle 4 years ago when the group solved it over many many weeks.  “Why could we solve it when we were 7 but we can’t now that we’re 11?” asked one frustrated student.

“For one thing, we spent much more time on it then.  That was all we did.  For another thing, we had a much bigger group – more minds working together.”

“I think there might be no solution,” said another student, who had not been in that original group.  Those in the prior group were even starting to doubt their own memories.  I assured them that there is a solution, and that it was within their collective grasp.  This reassurance gave them the willingness to sally forth.

L suggested that we look at every attempted solution so far and see if we could figure out what arrangements the group had not tried.  So we looked at the whiteboard with our cumulative work.  Unfortunately, over the weeks some of the work had gotten worn off the board.  Fortunately, I just so happened to have their work typed up on paper with a copy for everyone.  I passed these out.  L went right to work on her own checking and rechecking different permutations.  Everyone else focused on the board and worked together on re-trying old attempts (double checking the work so far) and coming up with new ways to try it.  The boardwork, directed by the students of course, ended up looking a bit like a probability tree (see photos).  The group finally had a systematic approach to the problem.  Hope was rekindled.

“There are hundreds of thousands of combinations,” answered R.

“Not that many,” replied someone else.

“A number that we do not know,” countered R.

“What would you call that number?” I asked.  We worked in this manner until we ran out of time.  The student s had basically turned this problem into a combinatorics problem.  It was a shame that we were out of time.  Most of the students seemed happy to have their handouts and their strategy so that they could continue working on this problem as the mood arose at home.  And that ended our math circle for the year.  An unfinished problem but not an open problem.  People with the tools and curiosity to solve it.  No resolution, but a realistic and hopeful math problem to ponder.  Not a bad way to end.

Thank you for sharing your kids on this math adventure.  See you in the fall!

EPILOGUE:  Nearly 4 months after the class described above, a new school year started.  As soon as I parked my car for the first session of the new year’s math circle, L approached me excitedly and said “I solved it!”

“You did?”  I asked, temporarily not really having a clue what she was talking about.  “Yes!  The unicorn problem!”

“I knew you would,” I said.  “As soon as I saw you writing down your work systematically, I could tell that you would solve it.”  She had worked on it over the summer on her own, just for fun.  And it happened!  I would love to hear from other parents about whether your kids mentioned or worked on this problem at all over the summer, if you know.

2This has since been revised, to also give kids some idea of what to do instead of yelling out the answer.  Stay tuned for details once we discuss the revisions in a fall class session.

3 “There is a unicorn dying at the end of a bridge. He has 17 minutes left to live, unless 4 people can join hands around him and recite a magical spell. There are 4 people on the other side of the bridge, but it is very dark, they have one flashlight, and the bridge can only hold 2 people at a time. Ginny can cross in 1 minute, Ron in 2, Fred in 5, and Percy in 10. Can they save the unicorn?”