COMPASS ART 6: Do Ghosts Have Guts? 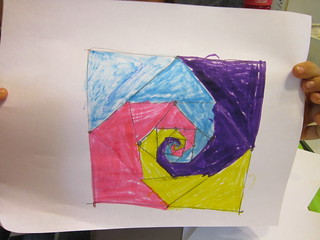 We played around with all of these questions until interest in spirals waned.  It was time for Euclid cards.1  First card drawn was #4 Straight Line.  The kids said it had “no curves, no detours.”  Next was #11 Obtuse Angle.  At least one student knew this one and explained it to the rest.  No questions.  Things got hairy with the next card drawn, #2 Line.  We had discussed this before, and knew Euclid’s definition of “breadthless lengh.”  But…

After this Euclidian discussion, we returned to our attempted definition of a spiral.  The kids refined it to “almost a circle, not a figure, the radius gets bigger.”

Finally, I presented an infamous question from math folklore:

“Huh?”  “What?”  “Is that a math problem?” were some of the perplexed reactions.  I assured them that it was a math problem, and that it could be answered.  Questions and conjectures started flying.  (Sadly, I wasn’t able to keep up with these to jot them down on the board, as is our custom.)

Several of the kids admitted to hearing this problem before, but no one knew what math concept was going on here.  One of the students who had heard it was dying to announce the answer (the color of the bear).  I held her squirming self off as long as possible, then finally instructed her to say the answer.  She was opening her mouth with glee to give the answer when another student jumped the gun and called out “It was white!”  The aforementioned student was livid, and sadly could not participate in the rest of the circle as she dealt with her emotions.  She had to leave.  (This incident, to me, deserves serious reflection.  How could I have handled this differently?  Could it have been prevented?  Was there something better to do than to have our extra adult help with the upset child while I continued the circle with the rest of the kids?  I’m sure there was.2)

So now, the cat was out of the bag, so to speak.  But not really.  “How does knowing that the bear was white help you to understand the problem?”  More questions, conjectures, and discussion came up.  Each thing that one person said gave someone else an idea.  The kids got to the point that it had to do with the earth being round.  But they couldn’t get to the next step from there.  Finally, one of the Ms in class suggested that we dramatize it, with her being the globe.  So I picked up an eraser.  “This is you,” I said to the class, and I set it on top of M’s head.  Then I made it “walk” the designated distances and directions. 3  Then L wanted her head to be the globe.  I demonstrated on her.

“I got it!” yelled S, jumping up out of his seat.  He explained why the bear was white, using mathematics.  He was speaking for the group, as none of them would have realized it on their own.  Some interesting questions then arose:

Then we were out of time.  As usual, kids showed their compass (and other) art from class, and I photographed it.  When you look at the photo gallery, you’ll notice that some work is drawn freehand, vs.  with ruler and straightedge.  Even those who didn’t have the patience or coordination to due everything in a purely Euclidian manner were still learning the geometry.5

The students were sad that this course was over, so I told them about Talking Stick Math Circle offerings for spring that they may want to enroll in.  One class is for 12 and up, so those older 11s could probably do it.  One is for 7-8, so a young 9 could probably do that.

Thank you all for sharing your kids for this adventure in geometry.

1 You randomly draw from the deck a card, which has a number and a geometric term on it.  Each represents one of the Definitions from Euclid’s Elements Book I.  Your choice is to (1) define the term, (2) construct the item with a compass and straightedge, and/or (3) ask your colleages for help.

2 This child was calm and fine by the end, but sadly missed a lot of the class.  I have given her the opportunity to do the math from today again in another setting.

3 My 20/20 hindsight reveals that this was a nice opening to talk about vectors.  Oh well.

4 You probably notice that I’m giving away a lot of the problem here, but not quite all of it.  I’m not going into detail about our discussion of the Bear Problem here just in case you’ve never heard it before.  I don’t want to steal all of your thinking fun.  Sorry that I’ve stolen so much.

5 For those of you who want a little more background on spirals with straight lines, check out these two sites:  https://www.youtube.com/watch?v=dmabyIu1IyQ and http://mathforum.org/sanders/creativegeometry/1.2spiralsqrt.htm