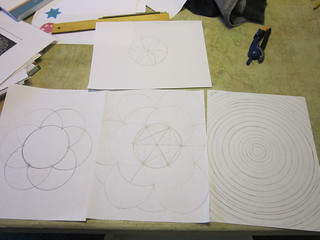 (October 15, 2015)  I showed the students a bunch of pictures of basic mandalas.1  People were intrigued, but alas not all intrigued by the same style.

One thing that all of these mandalas had in common, though, is that they start out with construction of a circle which is then divided into equivalent sectors.   How is this done with a straightedge and compass only?  No ruler.  No protractor.  No one knew.  I decided to show them how to mark off 6 equidistant points on the circumference, and then tell them to figure out the rest of whatever they wanted to do on their own.  Some split theirs into 6 sections as I did.  At least one of our M’s did 8 sections, and another person did 4 sections.  Take a look at the photo gallery to see the many directions kids took with this.

Some of the kids were interested in mandalas with the 6-pointed star framework.  So I played a game of Connect the Dots (“Connect the points,” S corrected me).  I labeled the 6 points on the circle A-F and asked each child to direct me about which points to connect.  We ended up with a beautiful design.
“Is it a mandala?” I asked.  Opinion was split.  “Why or why not?”  More discussion, until S synthesized everyone else’s conjectures (math teamwork!) into his own conjecture that it is not a mandala because it is not symmetrical.  Bingo.

We briefly discussed what it would take to make this georgeous creation into a true mandala.  I then asked the kids to name it before we put it to rest.  A bunch of names came up, but that one that seemed to stick was “Mandally” (rhymes with sand alley), suggested by A.  She suggested this because the word “mandala” was written on the board immediately to the left of point E, so it looked like “mandalaE.”  (See photos of boardwork)

Earlier in the day, I had happened upon an online discussion about a game about Euclidian constructions2.  In the game, challenges are issued to create certain diagrams in a minimum number of moves.  The discussion was about the challenge of constructing a square (user only compass and straightedge, of course) in only 8 moves.  So so cool, I thought.  So I told the kids about it.  There was no real interest there, though.  I think I brought it up prematurely.  Our group isn’t ready for squares quite yet.  Oh, if only we had more weeks!

DO WE AGREE WITH EUCLID?

I wanted to talk about something while the kids were busy constructing their own mathematical art.  Since the square challenge fell flat, I brought out my go-to activity, the Euclid Cards.  (Instructions:  pick a card at random, then define the term or construct it using a ruler and straightedge, then finally read Euclid’s definition.)

J went first, and drew Definition 15:  Circle.  That was a no-brainer to draw.  No one wanted to define it, since we had talked ad nauseaum about it for weeks.

Then things got interesting.  A drew “plane angle.”  The kids knew to break the phrase into pieces and define each word.  They agreed that a plane was a “flat space,” not a thing that flies in the sky or an adjective meaning simple.  The term angle took more work.  Once consensus  was reached, we checked Euclid:  “Definition 8 A plane angle is the inclination to one another of two lines in a plane which meet one another and do not lie in a straight line.”3

Wait a minute, the angle can’t be straight?  Do 180 degree angles not exist, according to Euclid?  People disagreed.  Consensus never occurred.  The kids weren’t as concerned about this as I was, but still they were interested and felt strongly about their own positions.  One thing they don’t know is that Euclid’s next definition, #9, gives a special name to a 180 degree angle.  I wonder if anyone will draw that card before the course ends.  Four of the eight students have had a turn to draw a card, and the rest are itching for a turn, so next week (our last session), that will be our first priority.  Time, alas.

Once again, please look at the photo gallery.  The work that these kids are creating is really worth appreciating visually.

See you all then!

1 such as http://www.funmaths.com/fun_math_projects/6-pointed_star_madala.htm, http://www.art-is-fun.com/how-to-draw-a-mandala, and some others that we had seen before.

2 the discussion is on Math Stack Exchange http://math.stackexchange.com/questions/438895/how-can-i-construct-a-square-using-a-compass-and-straight-edge-in-only-8-moves and the original game is on a blog called Science vs Magic http://sciencevsmagic.net/geo/