COMPASS ART #3 and 4: Fun with Euclid 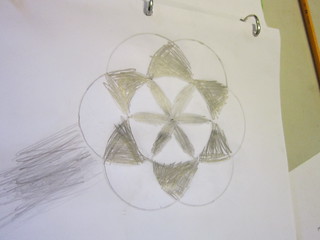 (October 1 and 8, 2015) I’m combining 2 sessions into one report,  mathematical conversation topics  grouped by how they went over with the students.

Thanks to all of you for sending your kids for all this fun with Euclid.  Thanks too to Angie, who has been taking some great pictures throughout this course.  Be sure to peruse the photo gallery to see some wonderful creations from the kids.

*We have 3 M’s in the class, and I haven’t figured out a good way to indicate who is saying what in these reports.  Sorry!

**Read a nice paragraph at another of my favorite math websites:  Math Open Reference  http://www.mathopenref.com/constructions.html

*** For those of you from out of town, Pope Francis was recently in Philadelphia, and people were on the streets selling just about anything – shirts, flags, Pope dolls, and you could even pre-order a toaster that imprints his image onto your bread.