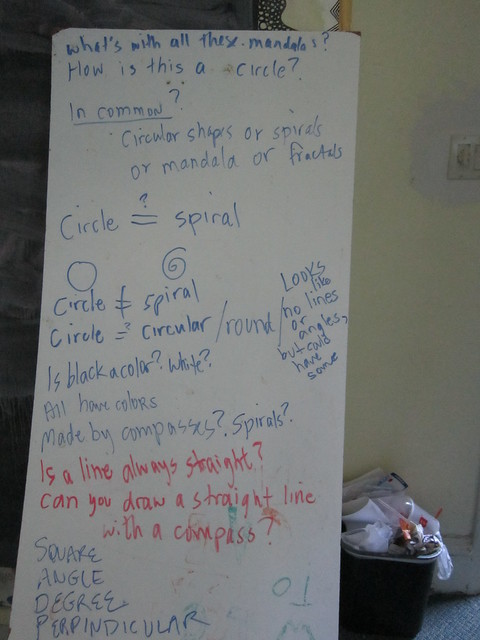 (September 17, 2015)  Our new math circle course on compass art for 9-11 year olds began with a switcheroo activity:  I gave everyone a printout of an image, and about every 30 seconds said “switch!”  I asked them to pass their page clockwise one person.  The images included:

“What’s up with all these mandalas?” asked M.  Good question, I said.1

“What do these have in common?” I asked.

“They are all circular shapes or spirals or mandalas or fractals” was the groups reply once they discussed.

“What do you mean by circular?” I asked.  Long discussion about defining these for things.    Mandalas, and fractals were easier to define/explain.  One person posited that spirals are a special type of circle.  Debate.  The group concluded that they aren’t the same.

No definitive answer about circle or circular.  The working definition from the group so far is that circles are “round, circular, and look like they have no straight lines or angles, but they might.”  (We had already discovered that some spirals are created with lines/angles.)

Getting back to the original question:  “What is ONE thing all these images have in common?”

“They have color!”  The kids went off on a brief tangent about the definition of color and whether white and black are colors, but then I required of them a mathematical/structural thing that the images have in common.

“They were made by compasses,” said J.  Couldn’t argue with that.  We discussed what compasses are and their possible origins (Galileo?  Euclid?  Perdix?), then got to work trying some.  I suggested picking out some images from what I brought, or come up with own ideas, to try.  They struggled a bit with how to use the tools, and found that some work better than others.  (If your child has a practically useless compass, replacing it is a good idea. Ask your child what the features of a good compass are.)

“Can you draw a straight line with a compass?”  I asked.  This brought back the debate over what “straight” means.  Then kids made many varied attempts.  “I’ll give you a break,” I then told them.  “See if you can draw a straight line using a compass and a straightedge.”  They debated the difference between a ruler and straightedge.  I told them a smidge about Euclid and ruler/straightedge constructions.  M and A wanted to see some, so I showed some from my notebook.

“What is a line anyway?” I asked, and more debate ensured.  We had no success without engaging in circular reasoning.  I told the kids that they are doing something that mathematicians do, debating what things mean.  Some kids found this hard to believe.

As we were discussing terms, kids were working on their own drawings.  There is a wide age-spread in this class (something manageable, and that we are working on), resulting in the student work ranging from toilets to intricate detailed art.  I told kids that they had to justify their work as compass art, not just art.  For most of the class, I tried to lie low conversationally and see what math interests emerged.

Somehow it came up near the end of class that a few students were still waiting for the math to start.  The others had to do some convincing that we we’ve been doing is math, geometry in particular.  Then time was up.  See you next week!
Rodi

1 Interestingly, I showed these images to a group of students years ago, and those students barely registered the mandalas and were really taken by the Flower of Life.  This group didn’t even notice the Flower of Life, but were fascinated by the Celtic mandalas.