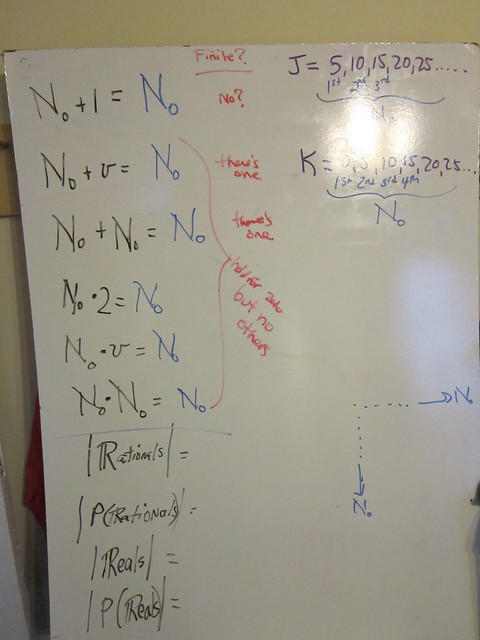 When I had asked the students two weeks ago what topics they wanted to be sure to hit in this course, F had responded “something with more answers than questions, something definite.”  I came prepared with a list of “the sort of algebraic conclusions that only a special notation for the transfinite cardinal numbers could have facilitated:”1  (Dauben, p182)  I took the list of algebraic axioms involving aleph-aught and put them on the board without “answers” for the students to figure out.  For instance, “aleph naught plus one equals ?” (see photos for full list).  Unfortunately F was absent today.  The others were not as enthusiastic about coming up with these algebraic conclusions, but because of their attitudes of good sportsmanship figured them out anyway.  They became interested when they compared Operations with Transfinite Versus Finite Numbers and saw how aleph naught behaved like zero in multiple situations.   Do aleph naught and zero have similar properties? They wondered.

We then moved into some math history and philosophy.

“In general, if you want to Attack someone’s Argument, how would you do it?” I asked the students.  After they clarified that we ought to be talking about “decent” ways to attack someone’s argument (versus character assassination, etc.), they brainstormed this list:

I had come in prepared to tell of attacks on Cantor’s math/philosophy of the infinite, and each one turned out to fall into one or more of these categories.

THE CONLUSION IS WRONG

We started with a discussion of how Leopold Kronecker, a person of huge influence in Cantor’s mathematical circle, just could not accept that transfinite numbers could exist.  Kronecker opposed Cantor’s theory, attempted to prevent Cantor’s publication, and “railed vigorously against transfinite numbers.”  (p66) Kronecker was a finitist, who put forth a “program of arithmetization, basing all of mathamatics on a finite number of operations involving only the integers.” (p68)  We talked about the back-and-forth between the two mathematicians and the academic-turned-personal politics surrounding their opposing positions (p127, 133-37)

“Why did Kronecker care so much about rejecting Cantor’s theory?” asked the students.  I tentatively posited that he was emotionally attached to doing math a certain way – with that method’s fundamental assumptions – and not seeing assumptions for what they are.  I read Dauben as having this perspective on Konecker.  I think Dauben said that a lot of younger mathematicians supported Cantor.  R strongly objected.  “I hate that when a new way of thinking comes into fashion, it’s always the old people who get blamed for clinging to outdated ideas, while the young thinkers embrace the new ‘better’ way.” No one really knew what to say to that.  Maybe it’s ageist but maybe it’s true.  I don’t know.

We discussed the differences between potential infinity and actual/completed infinity.  The former is involved in limits/sequences/calculus (which I gave a few brief examples of), while the latter is somehow “numerable” – you can say how big it is.  It’s this latter type of infinity that Cantor explored.  Earlier “Christian theologians were also opposed to the actual infinite; for the most part they regarded the idea as a direct challenge to the unique and absolute infinite nature of God.”  (p120)  The revered mathematician Gauss objected to a completed infinity as “only a façon de parler, in which one properly speaks of limits.” (p120)  Fortunately, our participant W who was helping with the German translations throughout the course knows French too, so she explained that Gauss was saying completed infinity is just a manner of speaking.

Cantor, however, was very religious himself and found allies with some of his Catholic contemporaries.  These theologians wanted to reconcile scripture with modern scientific thinking.  They agreed with “Cantor’s claim that instead of diminishing the extent of God’s nature and dominion, the transfinite numbers actually made it all the greater.” (p143)  We discussed various excerpts from Dauben  on this idea. The students found it hard to understand Cantor’s position that transfinites actually amplify the glory of God, but I hope/think they kinda got it by the end of this discussion.

THE METHOD IS FLAWED

Cantor’s contemporary Gottlob Frege supported the existence and legitimacy of transfinite numbers, but questioned Cantor’s methods.  Before we delved into Frege’s critique, the students wanted to discuss the term existence.  “What does exist mean?” they asked, and we discussed.

Frege believed that Cantor was over-reliant on abstraction, to the point that misused it.  (For details, see Dauben.  We got very specific in class.)  I presented to them Frege’s famous “pencil of arbitrary cardinality” example.

“What is the general concept of a pencil,”  I asked the group.  Varied responses:

We then compared the students’ responses to Frege’s 1890s conjecture on people’s responses to this question:  “Someone, being unmathematical, might reply :Pure being.”  “Another, presumably more attuned to Frege’s skepticism of what abstraction from all specific properties of a given object might produce, answered:  “Pure nothing.” A third (one Frege suspected of being a student of Cantor’s)found:  “The cardinal number ‘one.’”  Even more alarming, another of Cantor’s assumed protégés (prompted by what Frege termed some “inner voice”) regarded graphite and wood as “constituent elements” of the pencil and thus discerned the cardinal number “two.”” (p222)  Frege posited that the variety in responses is due to abstraction being a psychological principle not rooted in logic.  He belived that all objective mathematical knowledge must be rooted in “purely logical principles.” (p225)

This was great fun to discuss at length.  I also told kids how the lens of history now viewed Frege’s philosophy (quick overview:  great idea, but too idealistic, not sufficiently rooted in reality).

“Is there a number bigger than aleph-naught and smaller than aleph-one?” asked the students again – they had asked this last week too.  We never got time to discuss this, but again I told them that this is an open question in mathematics.  Chapter 11 in Dauben’s book deals with this very question.  The math behind it is challenging, but a motivated teen could understand it.  The term “continuum hypothesis” refers to Cantor’s position on this statement.  His position, though, is not the last word.

MOVING FORWARD WITH THIS MATERIAL?

A number of you have asked it we could continue this math circle beyond the end date.  I think I’ve figured out a way, for those who are interested.  The students could independently read one or both of the chapters of Dauben’s book that I never covered in class:  Chapter 11 “The Paradoxes and Problems of Post-Cantorian Set Theory” (theoretical mathematics), and/or Chapter 12 “Epilogue:  The Significance of Cantor’s Personality” (history/behavioral sciences).  Then we could have one more session during which each student would bring up one compelling excerpt and reaction and we could discuss.  If time, we could also delve a bit more into irrational numbers.  I’m happy to pass around my copy of the book.  Let me know if you’re interested in this.  I would want to do the session in May, so the students would need to read the chapter(s) before then.

It’s been delightful leading this class, this topic, this group.  Thanks for sharing your kids with me!
Rodi