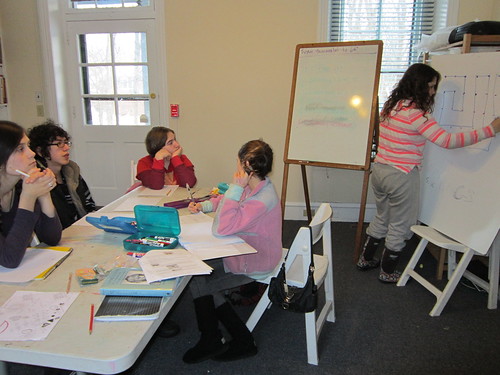 We began where we left off last week:  how can one list the set of rational (fractions and integers) numbers in a one-to-one correspondence with the naturals (counting) numbers? I gave the students some time to work on it, and everyone came up with a way to do it. (See photos for variations.)1  Everyone was happy to put that question to bed, and to have come up with a solution.  We then made a list of the different number types that we had demonstrated were of cardinality aleph null.  (Aleph0, said Cantor, is the number of elements in the set of natural numbers.)

We started to make a list on the board of various decimals between 0 and 1, some irrational and some rational.  “Imagine that this list goes on and on and on,” I said.  “What happens when you take our previous lists and add in irrationals?”

“There’s an infinite number of numbers – irrational and rational – between 0 and 1,” said the kids.  “You can always find another no matter how many you list.”

“That seems true,” I replied.  “But isn’t that the same case with the rationals alone?”  I drew a number line with a few fractions marked off between 0 and 1.  “You told me last week that no matter how close I put these fractions, you can always make up a number in between them.”  Since you can make the same argument for both sets of numbers, I argued, aren’t these sets the same size (cardinality)?

So it was back to constructing the list of all real numbers on the board.  Or at least a smaller-scale list.

QUESTIONS (from the kids):

Reply/Refrain:  “Cantor asked that question too.”  (I replied with the refrain that seemed to be the reply to almost every question the kids have been asking this whole course.)  The kids then debunked the idea of there being a “lowest irrational.”

The students all agreed that their instincts told them no.  “But how can you prove it,” I asked.

Now there was some discussion about how to do this.  A lot of uncertainty.  People were thinking that it couldn’t be done.  “Can you come up with a way to prove that it can’t be done?” I asked.  After some exhausting thinking, I told the kids that Cantor did come up with a way to do this, and that he is very famous for it.  They didn’t want to have to come up with his method themselves, so I told them I’d lead them through it while giving them thinking time between steps.

I then very slowly demonstrated this proof.  Verrrrrrrrrrrrrrrrrrry slowly.  Partway through, I started to hear excited “Ahs!” and “I sees!”  We played around with it a little bit, then I asked what can be concluded from this.  Everyone seemed to realize that this shows that there is an infinite set of larger cardinality than aleph null.  “What do you think Cantor named this number?” I asked.  “Bet null” proposed F.2 She was thinking systematically like Cantor, but he actually named it aleph one.    Even though everyone followed this proof and saw exactly where it led, however, it was hard to accept.

“If aleph0 < aleph1, then aleph0 can’t really be infinite,” protested W.  We talked about this common argument against transfinite numbers, and then I briefly discussed that term.3  This whole idea was controversial, and is still very hard to wrap your mind around.  You can grasp the insight to be had from Cantor’s proof, and then poof, it slips through your fingers.

If you’d like to see a good demonstration of Cantor’s Diagonal Proof, take a look at this video:  http://www.learner.org/vod/vod_window.html?pid=2285.  Watch the time interval 14:14-17:17.  If you watch before 14:14, you’ll see things we’ve already covered in this course.  If you watch beyond, it will be a spoiler of things that we’ll be trying to figure out in class.  The video is an episode of “Math Illuminated” produced by Oregon Public Radio.  James Tanton is the guest, explaining Cantor’s work on transfinite numbers.  It’s part of a course on mathematics that looks really amazing.  The course is designed for “high school teachers and adult learners,” but I think students would enjoy it too.4

1 A parent told me that one of the students had figured this out last week, but didn’t want to say anything so that no one lost the joy of discovering this for themselves.  That was good math manners!

2 Aleph is the first letter in the Hebrew alphabet. Bet is the second.

3 Cantor coined the term transfinite to convey the idea that number sets can go on forever (i.e. 1,2,3,4…) but still have sets bigger than them.

4 Here’s the URL for the course:  http://www.learner.org/resources/series210.html#