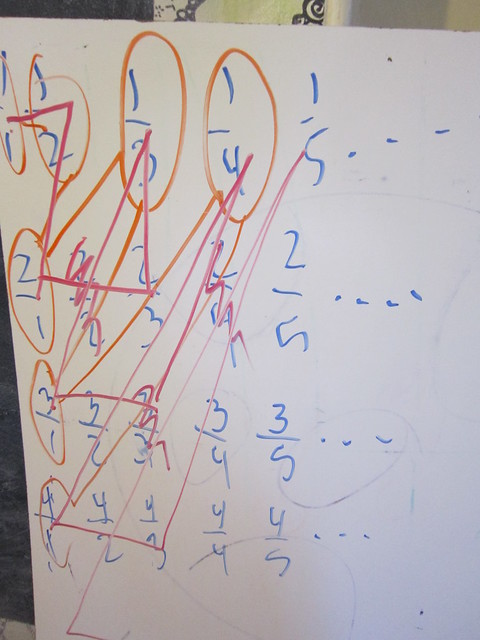 (January 19, 2016)  “I realized as soon as we left class last week that there was a big mistake in our Venn Diagram of number types,” I said to start our session today.

I felt like we then played “Twenty Questions” as the students narrowed and narrowed their conjectures about what the mistake might be.  (Is the mistake in the shapes we drew?  Is the mistake in the location of the circles?  Was it a mistake about where we put the imaginary numbers?  And so on.) Then the aha moment – they realized, almost all simultaneously, that they had listed rational numbers as a subset of irrational numbers.  Then they told me how to fix it. (See photos for their repair job.)

“Are we going to talk about philosophy today?”  asked R excitedly.

“Yes, but let’s continue where we left off with this last week,” I said as I held up the whiteboard with their efforts at quantifying the size of the set of rational numbers, aka their fraction table.

The 3 kids who worked on that last week groaned.  “I didn’t think about that even once this week!” said someone in a surprised tone.  They left last week’s circle with this question at the forefront of their minds.  Now, they explained the problem to our visiting student F, who was very curious.  They spent time coming up with more conjectures about how one could map the set of all rational numbers to the set of all the natural numbers.  They collaboratively came up with a diagonal approach, and worked on it for a bit, but couldn’t get every fraction in there.  Only 1 person was trying it on paper, and forming conjecture after conjecture.  I realized that the others didn’t have pencil and paper and were just dictating their thoughts to me.  I promised that for next week, I’d print out copies of their fraction table so that they could all play around with these attempted mappings.

“Did Cantor do this visually, or did he figure it out using the values of the fractions?  Or did he use strings of variables?  It seems that it might be easier that way,” commented one student.  I said that he came up with a way to visually see it, but that those other ways might work too.  I wanted to leave things vague while being encouraging, and also let them know that they were on the right track to a solution.  By the end of class, this student was using something resembling a graph theory approach with vertices and edges, which she called “using dots instead of numbers.”  We then tabled this question (again).

TAKING ON THE IRRATIONALS

“Do you know of any other irrational numbers besides pi and root 2,” I asked.  No one was sure, but they suggested making up your own. “Such as?” I asked.  No one was sure again.  So I proposed one by drawing a decimal point and then listing the natural numbers after it:  0.123456789101112131415161718….  The students would not take me on faith that this was irrational.  They questioned me and elicited from me two assumptions: (1) assume this number has an infinite number of digits (does not terminate), and (2) assume continuous construction of the number in the same manner (does not repeat).  They doubted whether having these two characteristics defines something as irrational, since irrational means unable to be expressed as a fraction and since you can’t really know what happens when something heads toward infinity. We debated the use of definitions versus characteristics.  I gave another example:  0.101101110111101111101111110…  “How do we know that pi never repeats,” asked the students.  I agreed that we could never tell from observation, but that the reason is beyond the scope of the course.1 (I wish we had time!)  We talked a bit more.  They were not fully convinced, but were close enough to accept my word that these numbers are irrational.

Then I dug myself in even deeper by trying to elicit a list of decimals between zero and one.  I was hoping to get a list of real numbers (rational and irrational) so that we could see if there’s a way to show how the cardinality (size) of the set of all real numbers (R) compares to the set of naturals (N).  We got a list on the board, and imagined it was so big that you couldn’t draw any conclusions from simply looking. “You can never list all the reals because you can always think of another one, but you can never list all the fractions either because you can always think of another one,” said a student.  The students were confused about what I was trying to do.  I tried several approaches, then let the cat out of the bag and told them that Cantor took this approach to show how R has more elements in it than does N.  In other words, a larger infinity.

RETREATING INTO PHILOSOPHY AND HISTORY

I suspected then that a bit of this confusion was from not everyone having a firm grasp on what irrationals are exactly, but that more of it may be from leaving our fraction question unfinished.  Maybe moving into the irrationals before putting the rationals totally to bed left some gaps.  I told the kids that next week we’d tackle that unfinished questions about the rationals/fractions first, and finish it right away even if I had to spoon-feed them Cantor’s solution.  Then we will go into deeper territory.  I’m feeling the pressure of time here, wishing we had longer than a 6-week course.  If I give the kids enough time to discover everything for themselves, we’ll only touch the surface of the topic before the course ends.  Drat.

Since everyone needed some relief now, we delved into philosophy.  Particularly Cantor’s famous quote “The essence of mathematics lies in its freedom.”  What in the world could that mean?

The kids’ various conjectures about this led in the right direction.  But then I had a hard time explaining it because I was using too many big words (quoting from both Cantor and Dauben) such as metaphysics, immanent reality, and the phenomenological world.  Our meandering discussion finally boiled down to the fact that in math, unlike science, you can just make stuff up as long as it’s consistent within the realm of mathematics and itself.  To quote Dauben, “Mathematics was therefore absolutely free in its development, and bound only to the requirement that its concepts permit no internal contradiction, but that they follow in definite relation to previously given definitions.” 2

For instance, Cantor declared that there is a number he was calling aleph null (the Hebrew letter aleph with a subscript of zero).3  This number is the cardinality of the set of the natural numbers, in other words, the size of that set.  Because of the nature of mathematics, said Cantor, he could do that.  Even if no one had before.

We then discussed a bit of the reaction to his announcement – both in the mathematical community and the religious.

To be continued next week.

1 Look up irrational numbers on mathisfun.com or Wikipedia for a good overview.  The pi question is explained well here:  http://www.askamathematician.com/2013/12/q-how-do-we-know-that-%CF%80-never-repeats-if-we-find-enough-digits-isnt-it-possible-that-it-will-eventually-start-repeating/

2 Georg Cantor:  His Mathematics and Philosophy of the Infinite, Joseph Warren Dauben, pp132-133