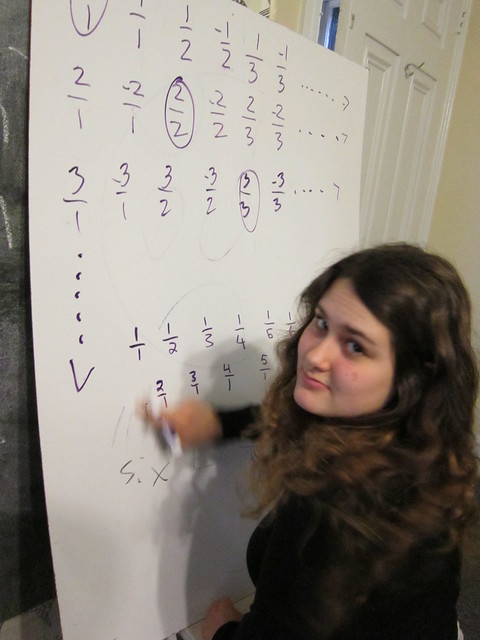 (January 12, 2016)  We had a small group of 3 teens today, so to start the session on an energetic note, I shamelessly presented some controversial material. I showed the students E.T. Bells’ 1937 book Men of Mathematics, a book many consider an accessible classic of math history.  I’ve relied on this book for various math circle discussions over the years.  Then I read aloud this passage from page 1 of Joseph Dauben’s 1979 book Georg Cantor: His Mathematics and Philosophy of the Infinite:1

“Like many controversial figures in history, Cantor was often misunderstood, not only by his contemporaries, but by later biographers and historians as well.  This is particularly clear from the myths which have arisen concerning his personality and his nervous breakdowns.  In his own day Cantor was regarded as an eccentric, if exciting, man, who apparently stimulated interest wherever he went, particularly among younger mathematicians.  But it was the mathematician and historian E.T. Bell who popularized the portrait of a man whose problems and insecurities stemmed from Freudian antagonisms with his father and whose relationship with his archrival Leopold Kronecker was exacerbated because both men were Jewish.  In fact, Cantor was not Jewish.  He was born and baptized a Lutheran and was a devout Christian during his entire life.

“Equally unreliable are Bell’s assertions about Cantor’s mental illness.  Bell’s interpretation deserves to be reevaluated not only because it has been uncritically accepted by so many mathematicians and historians, including the late Bertrand Russell, but because newly discovered evidence makes it possible to assess the nature and significance of Cantor’s breakdowns more accurately and in a manner consistent with his biography and intellectual development.  In fact, Cantor’s manic depression contributed in a unique and heretofore unsuspected way to his own interpretation of the nature of transfinite set theory itself.”

Just reading this quote aloud left me feeling as guilty as Bell for sensationalizing – not that Dauben sensationalized at all (his text is objective, I think) – in giving info about controversial aspects of Cantor’s life.  (Sorry, Mr. Cantor.) I gave all of the kids to share their reactions to this excerpt, then told them that once we spend more time on Cantor’s math we’ll move into philosophy and history.

“We’ll get to that.”  Then we briefly discussed Cantor’s one-to-one mappings of assorted infinite sets, which we talked about last week.

POWER OF A SET

I introduced the term “power,” which Cantor explicitly explained in his paper Beitrag.  Quoting Dauben here,

“Sets were said to be of equal power if they could be identified by a unique, reciprocal one-to-one correspondence.” (p59)

“What words or phrases jump out at you here?” I asked the group.  We ended up discussing in depth the terms identified, unique, said-to-be, and reciprocal, as they are used in this quote.

“Do you think the idea of power of a set was invented or discovered?” I asked.  The group decided that it was discovered.

“Was the idea of a set itself invented or discovered?”  Now we had some disagreement.  I said that people didn’t all have to agree, and that now we had entered the realm of math philosophy.  (Aha!) Then we returned to our question from last week:

If we consider keep adding in more types of numbers to our set under consideration, do we arrive at one (or more) set that is of larger power than that of the set of natural numbers?

“What are the different types of numbers,” the students wanted to know.   We talked about rational numbers.  Then irrational numbers – a demonstration of what they are and then discussion about why they were initially rejected in ancient Greece. Then imaginary numbers.  Then real numbers.  The students wanted to know what it means for a number to be real.  I told them of Cantor’s emphatic distinction “between the reellen (numbers), real numbers as opposed to the (imaginary) numbers in a formal mathatical sense, and realen (numbers). Actual numbers which enjoyed more than a purely formal existence.”2 While the students were thinking like Cantor in realizing there are multiple ways that numbers can be real, this “distinction was lost in both the original French and in the recent English translations of the work.”3

“Are irrational numbers, such as pi and root 2, realen?”  asked the students.

“What do you think?”  They kids decided that since those numbers express relationships between parts of things that can be shown graphically and (we think) actually exist in nature – circles and isosceles right triangles – then they are realen and, well, real.

“Are there other types of numbers (besides certain roots of negatives) that don’t exist?” someone asked.  We tabled that question for now, but adding it to our list of questions.

The class then dictated a number-type Venn diagram to keep track of all this.  (I, the secretary, realize now that there is a huge mistake in it.  Topic #1 for next week’s session will be to see if they student’s can find it.)

We were finally ready to see if we could map all rational numbers (integers and fractions) in a one-to-one correspondence with the natural numbers.  The group quickly and easily came up with a systematic way to list every fraction.  Too bad, though, that it was actually an infinite number of infinite lists.  (This eventually happens to everyone who tries this, I think.  With our group, it happened right away.)  They thought and suggested and struggled, but couldn’t come up with a single list.  No more ideas.  Maybe it couldn’t be done.  Should I let them struggle more, cheering them on?  (They seemed to be out of energy for that.)  Should I table this question and take a break with some other related?  (We only had 10 minutes left, so that didn’t seem productive in terms of energizing people to return to this question.)  Or should I just tell them that Cantor did it?  I chose that third option, hoping it would give them a second wind.  It did.  They struggled some more.  R came up to the board, picked up a marker, and said “I have an idea!”  That didn’t work, but it gave people more ideas.  “There must be a way to do it!” said R.  No one wanted me to show them how Cantor did it, but they all agreed that a hint would be nice.  I suggested taking out the negatives from their initial table of fractions, and first figure it out for the positive fractions, then work in the negatives.  Sadly, we were out of time, with everyone feeling like we just got started.  The kids all wanted more time.4

A younger sibling came into the room for the last 5-10 minutes.

To the teens:  “Do you guys actually think about this stuff when you’re at home?”  (She was surprised and impressed that everyone nodded or answered in the affirmative.)

Happy thinking!  See you all next week.

1 This book is my source for the philosophical and historical content of this course.

2 Dauben, p126.  I am fortunate to have a student who speaks German and can give us all the correct pronunciations.

4 I will continue to brainstorm on how we could squeeze in a little more time into the sessions.  That can’t happen for our upcoming session or two, but might be possible after that.