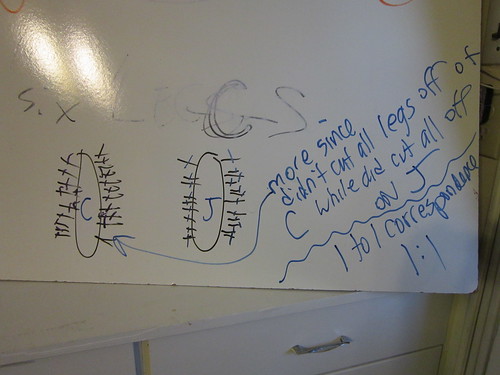 (January 5, 2016)  “Are there more books or bookcases in this room?” This question thus began our first math circle of the new year.

“Do you mean bookshelves or bookcases, not that it would make a difference?” asked W.  Everyone agreed immediately that there are more books.

ONE TO ONE CORRESPONDENCE

“How could you tell without counting?” I asked.

“You can tell by looking,” said M, and everyone. So I drew 10 hearts interspersed with 9 circles on the board.

“How can you tell which shape there are more of without counting?” I asked.  R proposed coloring them different colors to make it visually obvious, or measuring them to compare how much area they took up.

“How can you measure without counting?” challenged W.

The group debated briefly what to do, without resolution.

“Okay, what about this?” I said.  I held up 4 fingers on one hand and 5 on the other.  “Which hand has more fingers up, without counting?”

“I already counted.  It’s hard not to count,” said J, commenting on how automatic a reaction it is for us to count things.  R proposed a visual inspection of the area each hand took up, but there was no  consensus or conviction about how to definitely do it, since it was visually so obvious.

I drew 4 dogs and 5 cats on a board.  Asked the same question.  Lots of thinking, but no one had an idea yet.

“Let’s say I’m a millipede then.  You won’t be able to tell how many feet I hold up just by looking.  Actually, let’s say I’m two millipedes, holding up a different (but close) number of feet on each body.  How could you tell without counting which millipede is holding up more feet?”  Lots of quiet thinking.

“This millipede leg slicing represents a very important concept in mathematics,” I told the students.  They looked at me dubiously until I went on to describe the idea of one-to-one correspondence, of which some of them had heard.  “How would you apply this to the cats and dogs?”  The students then directed me to map each cat to a dog in the diagram by crossing them off one by one, showing that one cat was left over at the end, proving that there were more cats than dogs.  I then showed the same thing with the fingers – not chopping or eliminating them, but physically bringing the fingertips together.

DOES INFINITY HAVE A SIZE?

“Which set is bigger?” I asked.

“Do you mean bigger in size or bigger in number of things in the set?” asked W, once again thinking like a mathematician by clarifying the question.

“Bigger in number of elements in the set.”

“Set N is twice as big as set E,” replied everyone.  It was “obvious.”  Even though everyone agreed that these were infinite sets we were talking about.  “You have to assume that there can be different sizes of infinity,” pointed out R.  I wanted more convincing than “it’s obvious” before accepting that the sets are different sizes.

W suggested mapping identical elements (the evens), showing that the odds are left over and that therefore N is twice as big as E.  I added set O (a list of the odds) to the board.

I was determined to lead the students as little as possible in this session, to let the kids have the satisfaction of their own aha moments.  I didn’t want to spoon feed them Cantor.  They were suspecting that there were different-sized infinities, and that here were two that differed, but OTOH this didn’t make too much sense since infinity is, well, infinite.  I don’t remember what I asked, if anything, but W posited that it would be obvious that there were twice as many Ns as Es if there were a stopping point.  “What kind of stopping point?” I asked.  Everyone immediately knew what she meant:  finite intervals.

The kids suggested an interval from 1-10 inclusive.  That example clearly worked within the bounds of their conjecture.  “What if you change the interval?” asked someone.  They then found intervals that gave different results.  (See photo of boardwork for details.) They started to list their results.  Very satisfying work.  I told them that Cantor used finite sets to seek insights about infinite sets.  I told them more about Cantor and what made his ideas revolutionary.  Then we moved our attentions back to infinite sets.

The students were convinced that there are different-sized sets, infinitely large, within the set of natural numbers.  No matter how you map the elements from each set, it seems that the set of naturals is bigger than its subsets.  I finally had to just come out and tell them that Cantor didn’t think so.  “He found a way to map the naturals to the evens in a one-to-one correspondence.”  The students struggled for a while but then came up with a way to do it.  The did it the same way that Cantor did – it helped to know that it is possible.  It was still hard to believe, and I don’t think everyone left class fully buying in.  (Many of Cantor’s contemporaries reacted in the same way.)

“Can you map the naturals with the set of all positive and negative integers?” I then asked.

“But I bet Cantor said you can,” said R, catching on to the theme.  I told them that Cantor wanted to move away from using intuition and move toward logic conclusions using number theory.  With some work, the students were able to use the concept of one-to-one correspondence to determine that you can create a mapping that shows that the sets contain the same number of elements.  They then cast their net wider to include zero in their mapping to the naturals, this time with ease.

To the skeptical students, this activity felt more like a demonstration than a proof.  “Can you show me the mathematical proof that Cantor used?” asked J at the end of class.  (I promised that next week I’d bring in something beyond this proof, as we were out of time.)  I reassured that the research leading up to this idea took many years, so a one-hour session is probably not sufficient to really wrap your mind around this stuff.

“Where do you think this exploration will go next?”  I asked everyone.  They knew:  fractions.  Stay tuned.

NOTE:  Thanks to Bob Kaplan for the bookshelf question and to Jim Tanton for the example using fingers and the example using dogs and cats.  The background material for this course comes primarily from 3 sources:  (1)   by Joseph Warren Dauben, (2) Bob Kaplan’s presentation on Cantor at the 2011 Summer Math Circle Teacher Institute at Notre Dame, and (3) an online video of a math show from public TV.  In this course, we are taking the scenic route to Cantor’s conclusions. On the scenic route you are thinking things through and positing your own conjectures.  This (for now unnamed) video does a great job concisely explaining Cantor’s work on infinte “numbers,” but since it’s not interactive, it hands you the conclusions without giving you the fun of figuring things out for yourself.  I’ll give you a link to the video at the end of the course.  FYI James Tanton is the explainer in the video.