The goal of today’s session was to get everyone familiar with what typical functions look like. Over the weeks we’ll be ramping this up. Today, though, was the first session of a six-week “Picnie Math” course on functions designed for students approximately age 10-13. We had a circle of 13 students ages 9-14 picnicking on the grounds of Awbury Arboretum. I hope we have such lovely weather every Tuesday!

We started with a series of Function Machines. The students had a lot of fun designing the machine and coming up with fun sounds it makes. I’ve never done function machines with students this old and didn’t know how it would go over with them in a group. I know tweens and teens are playful individually and in small groups, but here they were in a larger group, and no one knew everyone in the group. But within minutes, they were joyfully playing. No is ever too old for function machines!

They named the first one Bob. With a slight revision and new rule, the old Bob became Bob 1.0 and the new Bob became Bob 2.0. Now that the students had the hang of how to do this, they were clamoring for the addition to Bill Cipher to Bob to create Bob 3.0. I had no idea who Bill Chipher is and wasn’t doing well drawing according to their instructions, so R came up to the board, took the marker out of my hand, and took over. Bob 3.0 was renamed Bob & Bill. This machine took numbers, doubled them, and added 1. (Remember that for later.) 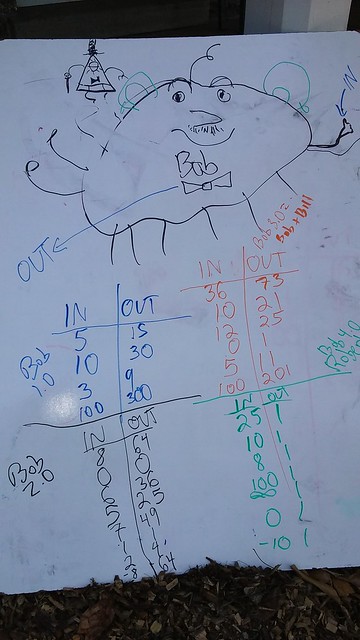 Bob 4.0, which was renamed Robert, led to some interesting debate. No matter what number the students put in, the “out” number was 1. Most agreed that the machines makes every number become 1. M argued that the rule could be that it divides each number by itself. Several students then said it could be any number of rules. Then came the real mathematical thinking: Can we be certain? How could we test? Could we put a certain number in to determine whether it’s turning things into one or dividing them by themselves? “What if you put in infinity?” Said M. Out comes 1. “What if you put in zero?” Still you get one. Then everyone agreed that the rule was not dividing a number by itself. I stressed that we need proof, so no one thought we had proven what the rule is for sure, just that we had disproven one conjecture about it.

“Fold a piece of string in half. While it is folded, make 1 cut. How many pieces of string do you have? Continue with another piece of string folded in half, making 2, 3, 4, and 5 cuts.” We didn’t have any string so I passed out long, thin strips of newspaper instead. It turned out to matter greatly. You can do things with paper strips that you can’t do with string. What if you cut the strip in half lengthwise, wondered the students? That changes the problem. (Fun!) We had to make sure that we only did with the strips what you can actually do with string to do the problem as intended. “What is the point of this activity?” I asked.

“To get us bored so we fall asleep?” joked J.

“No,” said S, “it’s so you can see a pattern – that the number of pieces is always 1 more than double the number of cuts, since you have that folded section on the end.” This from the youngest in the group; most of the older kids didn’t have a clue what he was talking about until they played with the strips and scissors some more.

“You’re absolutely right,” I said, “although I was thinking about something else. Can you tell that you’re creating a function here?”

“It’s Bob and Bill!” exclaimed M. I also find it exciting to realize how many things in math are telling an analogous story.

“This is a function machine,” I said. “You can express functions in lots of ways. What would be the input and output numbers here?” We wrote them on the board in a table, function-machine style. 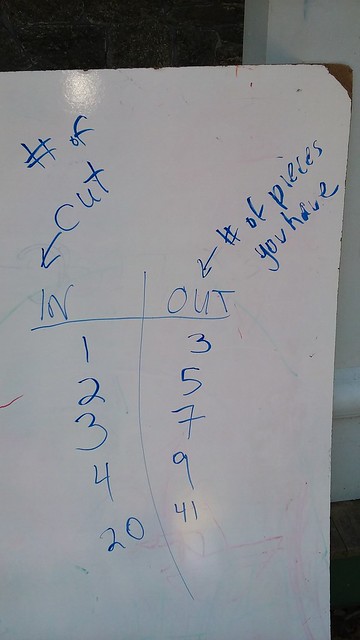 “This next problem,” I said, “was created by a Columbian mathematician named Bernardo Recamán Santos, who is still working in Columbia.” Many eyes opened widely in class, as S had just returned from Columbia and many of the students knew it. “You mean the District of Columbia, not Columbia-Columbia, right?” asked someone doubtfully.

Here’s the problem: Start at 0 on a number line. On move 1, move 1 space. On move 2, move 2 spaces. And so on. Move to the left if possible, but don’t go into negatives and don’t repeat. Can you hit every number on the number line?

All 13 kids stood in a line and moved together on a sidewalk chalk number line. Keeping track of moves was tricky. “Can we start over?” asked F after they had lost track. Wise question. They started over several times. Finally they started marking off their moves with chalk to keep track. It was fun to hear the conjectures change and evolve. R extended the number line as I only had set it up to go to 40. When they ran out of room on sidewalk, we debated extending the line into the (active) parking lot. Then F suggested “why not just curve it around to run alongside the first part of the line.” Great idea. But then R announced that we were out of chalk. Enthusiasm was waning among some participants. The question was compelling, especially since it’s an unanswered question in mathematics, but the work was tedious. We discussed what would happen if we were to wait till next week to continue. The line and its markings would definitely be gone. There was too much sun glare to make an accurate photographic record. The consensus was that we write down on paper what number the group was standing on and what move number they were on, and that I would try to quickly recreate the line next time. Then we went back to our picnic area for one last problem. 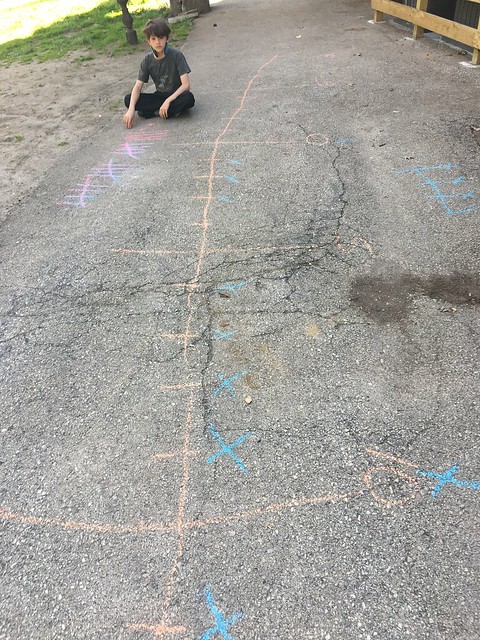 “So we did a bunch of functions today that everyone here knows the answer to, then one that no one knows the answer to. Now here’s one that at least someone knows the answer to but I sure don’t.” The group spent the final 10 minutes looking for patterns in this problem that Gordon Hamilton of Math Pickle had suggested for our group (thank you!). The problem is a function machine. Lots of mini-patterns emerged, but the group was not able to come up with an over-arching rule. “Does the same thing have to happen to every number?” asked F. No, but there does need to be a pattern. “If you don’t even know what the pattern is here, why do you expect that we could figure it out?” asked someone. 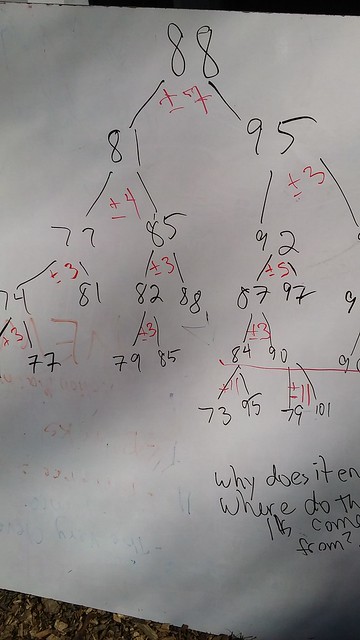 “There are plenty of things I don’t know that students can figure out.” They looked at me dubiously. Then we were out of time so I sent them home, although some lingered to keep working on the problem.

A NOTE ON NAMES: In past years, when I wrote these reports I used different letters for students’ names than their actual ones when they shared a first initial. This year I’ve stopped doing that. So when you see M here, you don’t know which M said what. We have 2 Ms, 2 Fs, and 3 Ss. Just email me if you want me to tell you which things your own child said – I’m happy to fill you in.

Function Machines – the students design a “machine,” the facilitator states the input and output (often but not always numbers), and the students must discern the rule.

Teenagers and play: I had a conversation with Natural Math author Yelena McManaman about my experience with the tweens and teens doing function machines. She told me of a study of teens on playgrounds: playgrounds are geared to kids 12 and under, but when teens were given access and time, they ended up playing joyfully too. I couldn’t find the study online, but if you search “the importance of playgrounds to teenagers,” a lot of interesting articles come up.

Racamán sequence: http://mathpickle.com/unsolved-k-12/ (click on “grade 5,” go about halfway into video), https://mathlesstraveled.com/2016/06/12/the-recaman-sequence/, https://es.wikipedia.org/wiki/Bernardo_Recam%C3%A1n_Santos (this one is in Spanish). Even though the “Unsolved K12” committee recommends this problem for grade 5, that’s really just a minimum recommended age, as no one has ever solved this.