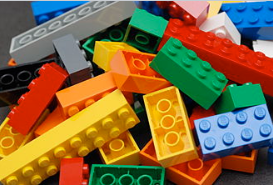 (November 22, 2022) We did a few rounds of “regular function machines,” in which students put in numbers and I tell them the outputs and the students have to figure out the rule. The rules students figured out were f(x) =  x+7, f(x) = x-12 (this rule got students into negative numbers – I wasn’t sure everyone had heard of them but didn’t explain) and f(x) = 2x+1.

I didn’t mention algebra, variables, or “f of x” notation but conceptually the students were doing it. This point here was just to make sure that everyone knew how basic function machines work. Then we moved to Legos.

The Legos were in little bags. A student would build an “input” Lego structure with the bricks from their bag, then I would reach into a box and create an “output” structure following some rule. Again, the students had to guess the rule.

I said, “But before we start, let me show you a few of my mathematician cards so you know the history of these problems. Dr. Brandy Weigers invented Lego function machines.” I showed a card with Dr Brandy on it. I had a paper printed out from Dr Brandy with the instructions for doing Lego function machines. I referred to it as “Dr Brandy’s mathematical secrets,” so of course a few of the students tried to playfully sneak a peek.

I showed another mathematician card: “Dr. Eugenia Cheng wrote about how you can talk about the axioms of mathematics with Legos.”

“How do you do that?!” asked Z. D remembered that axioms are the answer to the question “why” when the reason is “Because I told you so.” I tried to explain it as well as Cheng does in her modern classic, How to Bake Pi, but struggled. Why are Legos plastic? Why do they attach the way they do? The answers to those questions are axioms. But, on the other hand, you can prove the answer to this question: Can you build a stack of 6 Legos that will stick together? So that’s not an axiom. U built a model to demonstrate. Then U said, “Can we get to the game now?”  A few others were still interested in the idea of axiom, so I tried to multi-task and talk while doing the Lego rules, but that was hard. Creating the outputs required a LOT of concentration.

Some of the rules, thanks to Dr. Brandy’s mathematical secrets were f(x) = x in terms of shape and color, f(x) = 2x shape and color, replace a certain color, count the studs/pips, and x+5 in terms of number of studs. Sadly, we didn’t have enough time to get to the really exciting part of the game, composite functions, in which you start with a certain struggle and then run it through multiple functions.

But this activity did help me in my own struggle with how to define axioms for students this young: the students like this definition of an axiom: “because I said so.” (In our final sessions I hope that students understand that axioms are also generally accepted and also sorta obvious. I’m speaking to 7-9 year olds here. I am not presenting a rigid definition of axioms here, more of a contrast to theorems, which are things you can prove.) In the first session, we had worked on Zvonkin’s proofs, so the students easily understood the contrast between axioms and things that are proven.

Can the students develop a lasting understanding of axioms versus theorems in a five-week course? We shall see.