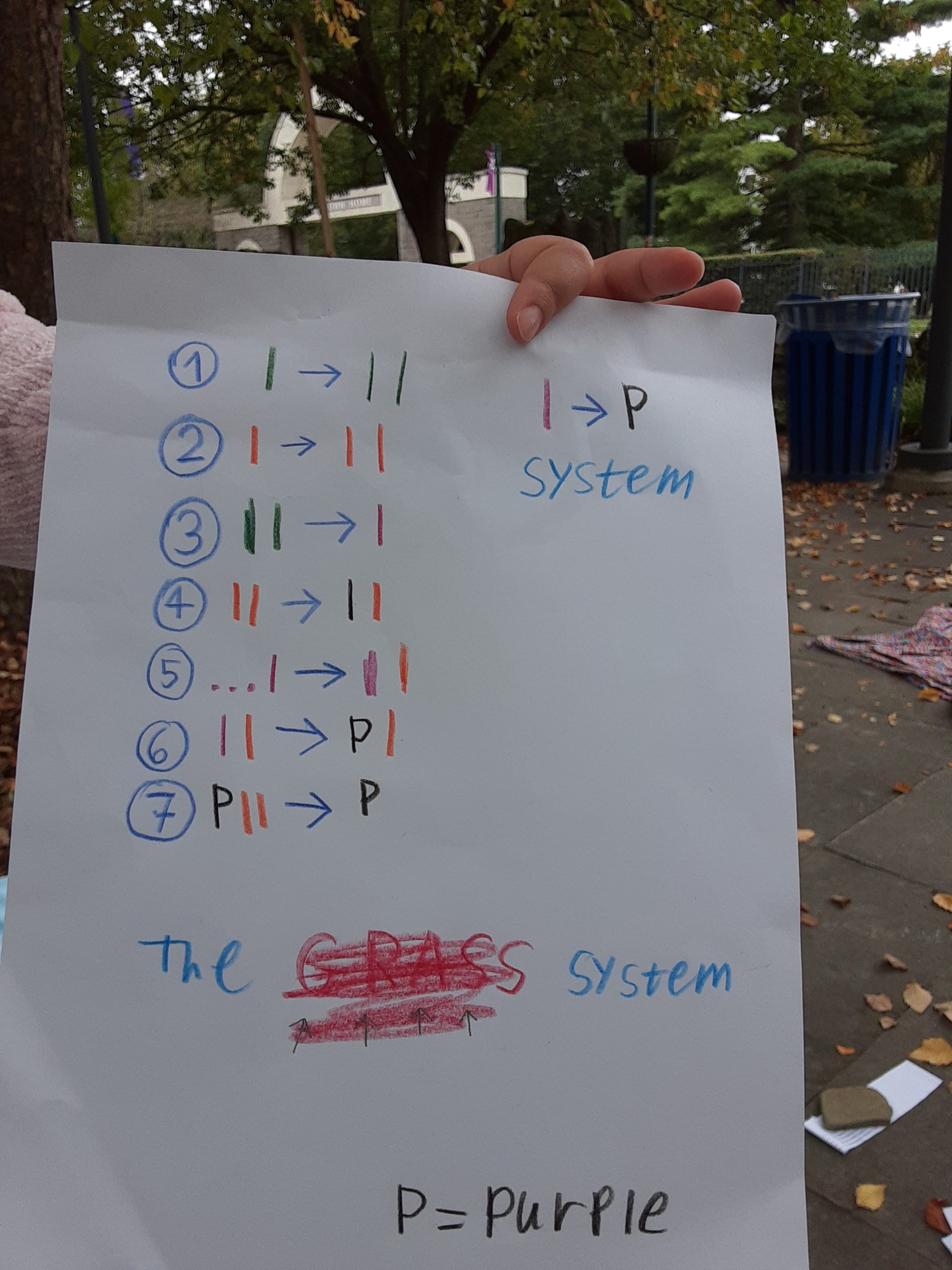 We took a break from axioms to play the game Criss Cross today. You draw 7 dots/vertices inside a triangle. On your turn, you connect two of them with an edge/line segment. The last person who is able connect two vertices wins. Is there a winning strategy?

I did a demonstration game with the students, and fortuitously got an unexpected result. I didn’t understand why at first, but then realized I had forgotten to tell the class one of the rules. What rule do you think I forgot?  (I just LOVE that I got to ask that question!) The students figured it out – the line segments are not allowed to cross. I love that this happened organically because sometimes in Math Circles we leaders posit an intentionally vague question with the goal that students ask clarifying questions. But this time I didn’t even plan it!

Melissa paired students into breakout rooms to play Criss-Cross on Jamboards. I asked them to keep track of number of vertices, which player went first, and who won for each round. I bounced around from room to room to check in and offer support. Even before combining results, the students had an initial conjecture.  “Seems like the first player wins if there’s an odd number of vertices, second if even.” Then students combined results. Almost all the results supported the conjecture.

But S&S got a different result…

What could explain this? Dead air.

I rephrased the question: If you yourself had played every single one of these games and gotten these results, what would you be asking yourself? Now students had some ideas. It’s easier to come up with a question than a conjecture. Perhaps more accurately, it takes more courage to voice a conjecture than to ask a quetion. I missed an opportunity on my part to say this to the students. Drat.

“Maybe S&S have a move the rest of us didn’t see.”

Should we take a look? Together we tried to recreate their game. S and S coached the rest of us on their moves. But we were out of time. We decided to continue this exploration next week.

To learn more about this game, its underlying structure, and an introduction to graph theory, take a look here:   https://www.mathteacherscircle.org/session/game-criss-cross/

Next week, we’re going to start Math Journaling. Melissa will provide paper (drawing paper and graph paper). Bring your own pen/pencil and something for drawing in multiple colors.

I told students this at the start of class, after Melissa and I had brainstormed about how to engage students who want to draw and at the same time keep the Zoom screen easier to follow for students who get distracted. (Take a look at the image in the left-hand column of this blog post to see an example of a busy Zoom screen:)

A confession: I’ve led weekly math circles all year long for over a decade and have never played a competitive game with students. I had a Good Reason. I just can’t remember it. Was it that I thought games would somehow “cheapen” mathematics, or reinforce the idea of math as a tool, or what? I don’t know. This past summer, I was toying with idea of introducing some games, when knew I’d be leading a year-long course. Historian/artist Nell Painter, in her memoir Old in Art School, talks about fellow scholars who run the risk of losing something important by clinging to the  gravitas of academic culture. This quote was the final nudge I needed to start playing some games:

“They identified with my break for freedom but feared their academic or lawyerly selves that had already quashed their inner Beyonce, that the wet blanket of professionalism had smothered their flame. … Yes, yes, I loved all the steps entailed in scholarship, but I reached for more, to take other steps, additional steps, call them side steps, for freedom from evidence-based knowledge of things I could know for sure, things that stood for much smaller as well as larger things, beyond and around the truths of the archive. Fiction. Visual fictions. I wanted to make art. Seriously. And to make serious art unfettered from the mandate that I address larger truths.” (page 17)

After reading this, I said this to myself:  In Math Circles, do we always have to be fettered to the mandate that we address larger truths? Or can we sometimes just have fun? In other words, can we  just do graph theory?  Graph theory, of course, is actually devoted to uncovering larger truths, but maybe sometimes we can delegate the processing of larger truths to our subconscious and just make art, play games, or whatever.

So that’s what I had to say to myself to stop taking myself so seriously and free myself to just play Criss-Cross. But I have no plans to do anything more competitive than Criss-Cross.

I’m posting this weeks later, at a time when the School House Lane Math Circle has gone on hiatus indefinitely. For those of you who want to do math journaling at home, I recommend that you follow the work of Denise Gaskins. For those of you who want to further explore the axioms of mathematics, I’d recommend you try the MU Puzzle. You also may want to try playing Criss-Cross at home. You can follow this blog to read about other activites related to Axioms that the Lovett group is doing. Feel free to contact me for direction on recreating those activities at home.

This week I “strewed” a bunch of things on the ground to see what, if anything, would catch students’ interest. (Actually, since I have a broken foot, I had the students doing the strewing without telling them what/why.) I began class by asking What should we talk about?

I mean, what should we do today?

There’s all this stuff that you all helped me put out.

“Let’s see what these papers are,” said S

Good idea – why don’t you pick a pile of your choice and see what it says. (Session proceeded by each student taking a turn choosing something on the ground to explore.)

S picked up a pile of papers, which contained the rules in words to last week’s student-created formal system. S transcribed the words into symbols on a piece of paper The students starting talking to each other.

“Should we keep or get rid of Rule 2 and Rule 4?” they wondered. These rules were not needed to solve the student-designed “Pink to Purple Puzzle. The students’ conversation moved into puzzle design:

I finally interjected with a question: Are you still going to name the system itself, like how in Gödel, Escher, Bach Hofstadter designed his “MU” Puzzle within the framework of what he called the “MIU System?”

Huge discussion! The students produced many more name ideas, in addition to the first five that they came up with last week:

At this point the students decided that they should use their first initials within the phrase “not-boring:” “Wait, how many combinations are there?” wondered the students at this point. Conjectures: 8, 16, 24. I asked, How could you figure out how many combinations there are? They ignored me, and kept trying to convince each other that their conjecture was right, without explanation or proof. I asked again. They ignored me again. I let it go. (See the “pedagogy” section below if you’re curious about all the thoughts my brain was yelling at me at this point.) Their attention moved from conjecturing about combinatorics to coming up with more possible names:

Each name had a good explanation. Students proposed voting. “Can I vote for more than one?” someone asked.

“How much time do we have left?” asked R, who has evolved into the time-manager of the group. Once R asks, the group somehow arrives at a consensus about whether to continue with the current problem, or get in one other short thing before we have to leave. Today, we tabled the name-choosing so that someone else could choose from the pile of strewn papers.

The next pile of papers was images of tattoos, and the next was a game of Odd One Out. This was all about Epiminedes, whom we’ve discussed before.  Lots of laughter, which ended with G role-playing being an oracle.

Strewing is a pedagogical method whereby the facilitator places seemingly random things around the space in seemingly random placements, and then switches up the things and the placements after a certain amount of time. The goal is that students will pick up what they notice get curious about it. Here are the items I strewed today:

My Brain on Combinatorics

Combinatorics!  Oh boy oh boy oh boy! I’ve always wanted to talk about combinatorics in Math Circle and now here’s my chance! The students have discovered a Need for The Topic. Teachable Moment! Every teacher’s dream! I know lots of ways to present it, and I love the topic myself, and they may learn about this in middle school or high school so now they’ll Get Ahead, and maybe it will be on their SAT, and how cool is it that I’m showing it to them when they’re only 9 years old, I’m such a pedagogical rock star that I led them to this point, and … wait. Drat. They’re not interested. They don’t want to know the underlying structure of how combinatorics work. They don’t have a real Need for The Topic. I didn’t lead them to this point. They just want to generate a list. Sigh. Okay. I’ll keep my mouth shut. Back to respecting the students’ curiosity. I can do this.

For details on the Odd One Out game and info about Epiminedes’ tattoos, see the left column in last week’s blog and Wikipedia. (The activity played out similarly in the Lovett group this week as it did in the SHL group last week.)

For details, see the right column in last week’s blog.

“I wish we could do Math Circle every day.”

“That’s too much. Maybe twice a week at most.”

“I wish this could go on forever.”

In every session the students lament that this is only a 7-week course. They ask for more. I do plan to offer a 6-week course in the spring, probably from mid-April to late-May. The topic will probably be Set Theory, specifically as it related to the axioms of mathematics. This current course will not be a prerequisite. Anyone in the age group (TBD) is welcome to sign up. I’ll be posting an interest form on the website within the next month to collect scheduling preferences. In the meantime, let me know if anyone is interested in a course that meets twice a week instead of once.