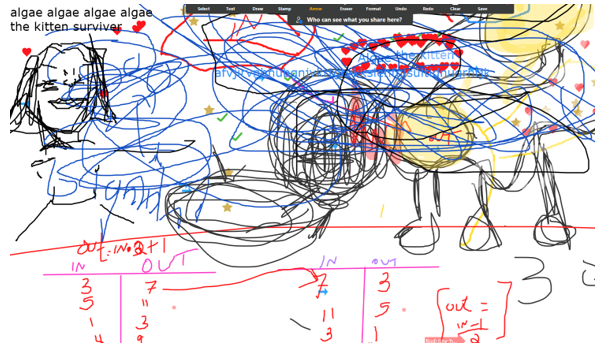 Going into the second week of our Axioms of Mathematics courses, my plan with the School House Lane group is to linger, to savor the beauty of the math in Hofstadter’s book, Gödel, Escher, Bach, doing everything in the book that can be adapted to this age group, in chronological order. Since the Lovett group only meets for 7 weeks, we’re going to fast-track it a bit to get to the Big Ideas more quickly. (At that point, I hope, students in the Lovett group who want to go deeper can use these reports to extend their explorations on their own with their families’ help.)

Here’s what I told the class first:

Last week, I said “I’m going to give you a math statement: I am lying.” Was that a statement?

So much dead air. We’ll come back to that, I said.

Instead, I drew students’ attention to Epimenides. I gave a one-sentence bio and then Melissa chimed in to ask students to put him in historical context, as the students have been talking about historical eras at SHL outside of Math Circle. I told the class that Epimenides told his fellow Cretan citizens that “all Cretans are liars” in order to convince them that Zeus was (is?) immortal. What would Epiminedes need to say next in order to be convincing?

The students pretty quickly came up with a solution, which is what Epimenides is famous for saying, “Zeus is mortal.” (The discussion reminded me of last week’s session, when the students taught me about Opposite Day.)

THE SONG THAT NEVER ENDS

The students made their own Moebius strips. I asked whether this activity has anything in common with anything we’ve talked about in the course so far? I was certain that they’d say The Song that Never Ends. But no. Instead, it reminded them of Epimenides because of how it loops. I love that students rarely say what I expect them to. I also am getting excited that they are connecting these seemingly-random activities by describing them as loops (what Hofstadter calls “strange loops”). The rule from the Function Machine of the Day was this:

. After students deduced this, they worked on figuring out its inverse. The first conjecture was

. We tested it by plugging in x=7 and found that it didn’t work. (I emphasized that plugging in numbers is such a useful strategy in math.) I gave them a hint: when you do inverses, the order of operations is at play, so you may need to reverse the order. (Honestly, I just wanted a chance to say the phrase “order of operations” out loud – in my experience, students of this age group perk up when they hear that, unlike older or younger students.) Anyway, this hint helped, and the students came up with the correct inverse,

, or in Function Machine language,

. (FYI I do plan to gradually transition into algebraic notation as the year goes on.)

When I facilitate in-person Math Circles, I just nod toward whoever’s turn it is to talk, so I don’t influence what they are about to say. That’s harder on Zoom. In this group, I’m developing a practice of saying to students What are you thinking? Instead of something like What are your thoughts about X, or Do you have a conjecture about Y, etc. The contributions to discussion from every participant in this Math Circle are so valuable that I find myself consciously trying to avoid contaminating their thinking with questions that might unduly influence. My challenge now is to see whether What are you thinking is unduly influential. Hmmmm….

Hofstadter didn’t actually talk about The Song that Never Ends in his book. Or at least not yet – I’m not done with the book yet; but it’s not in the index. I came across the connection of this song to strange loops in the James Propp’s article “Breaking logic with self-referential sentences” in his blog Mathematical Enchantments. Adults who are following along may enjoy this article, in which Propp connects the work of Hofstadter and Gödel  to a lot of interesting mathematical paradoxes and popular songs.  FYI, if you read the article, in Math Circle, I am never going to use Curry’s Paradox to prove whether Santa Claus exists. Feel free to use that one with your children at home!

You may be wondering about all the doodling on the screen while we were playing Function Machines. I generally draw a line on the screen to separate my territory from that of the students. In my territory I put the t-charts with the numbers and in the students’ they draw the machine before we start experimenting with numbers. But the drawing keeps on going while we’re conjecturing. I posit that the cognitive benefits of doodling enhance the problem-solving.

Let’s start a new custom: every time a bus or truck goes by and we can’t hear each other, let’s take a breath, I said at the start of class on a trafficky morning. “I know some meditation breaths!” said A. Mathematicians like to take deep breaths. Why do you think that is? “Frustration! Math can be frustrating,” said the students. It can be helpful to build up frustration tolerance so that you can explore some things in math. (I replied) Here’s something that may or may not be frustrating: the MU Puzzle.

[SPOILER: If you’re from the SHL group, students haven’t seen this yet – don’t mention it to them – thank you!] We’re going to talk about formal systems. What is a system? Discussion: what they are, problems in how they work, etc. What do you think a formal system is? More discussion: concluding with the definition of a formal system. We’re going to talk about the MIU system. All that’s in there are the 3 letters MIU. You can make strings out of them. Discussion: what are strings in math? Here’s the puzzle: If you start with the sting MI can you produce the string MU from it if you follow the rules? What do you need to know?

At this point, I really thought students would say that we need to know the rules, and then I’d present the rules to them one by one so that students could play with each and come up with conjectures. But no.

“We need to know the alphabet!” said R. And we were off!

THE RULES EMERGE THROUGH INQUIRY

The students posited conjecture after conjecture about what was needed until they realized they needed to know the rules. But they didn’t ask me what the rules are. They asked questions about the rules. (So exciting for me!) “Is there a rule where you can remove an I? … add a U? …delete something?  …copy something? ….switch the order of something?” I had a yes/no answer for each question: for instance, Rule #1 states that if you possess a string whose last letter is I, you can add on a U at the end. As the rules emerged, I added them to our running list on the ground in sidewalk chalk. Once students had arrived at all 4 rules, they got to work experimenting. For a long time. The students eventually entered “If-Only” mode (“if only you could triple a letter,” etc…). This mode reinforced the definition of a formal system, that you have rules and you have to follow them. Then students started working backwards (I affirmed that WB is a big strategy in math) – “If we could get MUUU, we could use Rule #4.” S was playing with Rule #2, trying to find a string with a number of elements after the M that’s divisible by both 3 and 4. I showed them a decision-tree approach that someone had tried. They engaged in other problem-solving methods until they started wondering whether the answer is that “it’s impossible.” “Why in the world did Hofstadter make a formal system like this?” someone asked.  I don’t want to put any spoilers about the puzzle here, so I’ll skip to a later discussion.

How would a computer tackle this problem? I asked. Lots of ideas. Then G announced excitedly “A bee just landed on my thumb!” We talked about how bees like to land on us and see if we are flowers and when they find that we’re not, they fly away. The talk went from how computers handle problem-solving to how bees handle problem-solving to how humans (the students) handle problem-solving (like the MU Puzzle). If a computer uses what Hofstadter calls “Mechanical-Mode,” what would you call what humans (and maybe bees?) use? “Biological Mode,” said one student.  “Loophole Mode,” said another. I told students that Hofstadter calls this “Intelligent Mode,” that trying to jump out of the system, as the students wanted to, is a fundamental characteristic of Intelligent Mode.  I then showed them the subtitle of the book: “A metaphorical fugue on minds and machines in the spirit of Lewis Carroll.”

If something seems to go on forever, looping around without an answer, how can you know whether there’s eventually a solution? After students talking about possible tests, I mentioned that formal systems must have a test so that we know we won’t be waiting around forever for our answer. I did eventually cave, at students’ insistence, and let them know what the final result of the MU Puzzle is. I challenged students to think about at home, if they want, how to prove the answer to the MU puzzle, or come up with a test for it.

The noisy trucks and the bee: Sometimes the most interesting discussions come from the side topics . I’m really interested in, and respond to, those moments when students sense something beyond the overt mathematics, that seem tangential but actually hit on the underlying structure of things, or hit on
a useful way to think that structure.

The MU Puzzle: Those of you who know me may be wondering “Why did she cave? That’s not like Rodi to give away a solution.” My aim in this course is to talk about theorems versus axioms (which is what we were doing without using those terms yet) and to discuss M-Mode and I-Mode. Since we only have 7 weeks, I don’t want to lose a week or two on coming up with a proof for a result. I think several students may be interested in doing this at home, so I didn’t reveal how to prove it. Wikipedia shows the proof. If you haven’t played with the puzzle, I recommend you don’t read below the puzzle itself in the article because it gives away the answer too fast. Or better yet, read about it in Hofstadter’s book (pages 33-41) to enjoy the commentary.