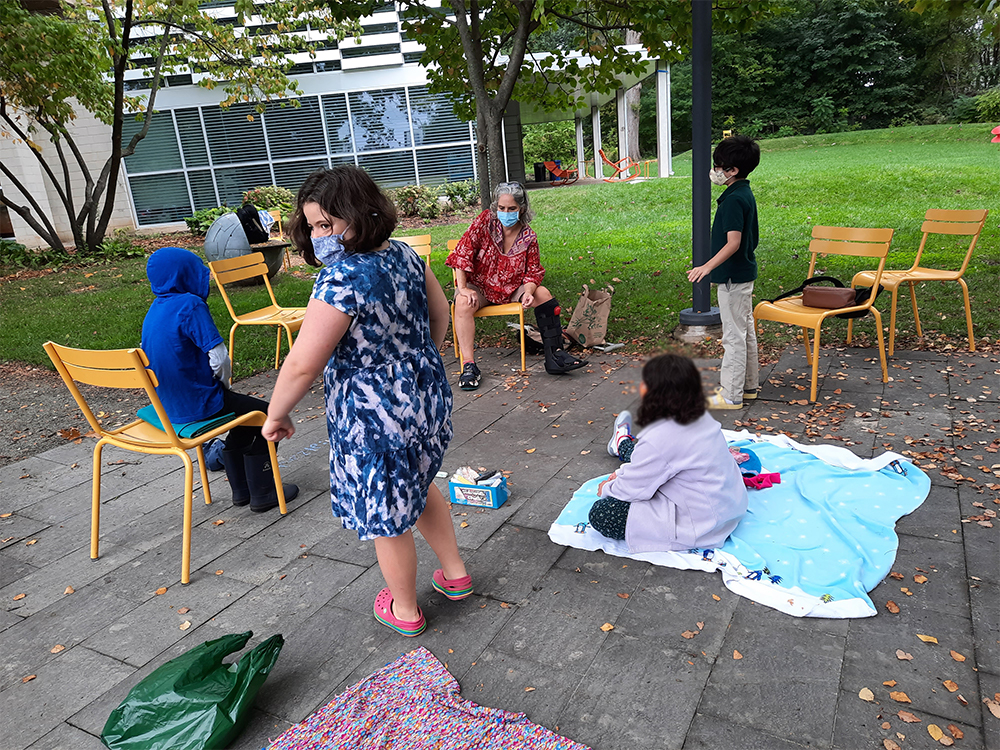 I don’t want to “present” things; I want to “ask” things. I want to just use words without defining them. To just expect that if students don’t understand, they will ask and I will answer, hopefully by throwing a question right back at them. With this in my mind, we entered week three of “Axioms of Mathematics.”.

Students looked at 4 images of artist’s renditions of figures from ancient Greece.* Which one is the Odd One Out? (Before reading what the students said, which one do you think?)

“The one on the bottom left, with the eyes closed.”

“The one on the top left, with the different color.”

“The one in the middle since it’s a painting, not a sculpture.”

“The one on the right since the ears are showing.” (I explained that I really enjoy playing Odd One Out this way, trying to make a case for each item in the group being the Odd One.) Today, I wanted to focus on the bottom left: Why would an artist depict someone with their eyes closed?

We had fun talking about Epiminedes’s history – Why are his eyes closed in the art? Why did he have tattoos? Was he a God? How old do you think the stories say he was? What’s the difference between an oracle and a shaman? Did he really sleep for 57 years or was he a hermit?

*I later briefly mentioned who the others were – Zeus, Pythagorus, and the Oracle of Delphi.

THE CHEETAH VERSUS THE SNAIL

Who or what is the fastest runner in the world?

Who or what is the slowest runner in the world?

A snail or a sloth.

Let’s model a race between a snail and a sloth so I can prove that motion is impossible. How long should the racetrack be?

Let’s give the snail a head start to be fair. How much of head start is reasonable?

So who is winning so far?

This is definitely hard. That’s why people have been doing this problem for over 2,000 years.

Discussion: A reality check on the part of the students revealed that the cheetah will win, look at the biology and physics of how animals and racing work. But Hofstadter refers to this scenario as “can’t catch up.” It depends whether you frame it in reality or within a formal system, where these are the rules and they have to be followed. You can’t come out of the system or change the rules to account for science. Students did end up agreeing that if stick with this system, the cheetah can’t catch up.

I mentioned that the ancient Greek philosopher Zeno proposed this problem (with several others) to demonstrate that motion is impossible. Instead of a cheetah, Xeno suggested Achilles. Instead of a snail, Zeno suggested a tortoise. But no one in our group was convinced that motion is impossible so we’ll need to do Zeno’s other 3 famous paradoxes to see if the students are convinced.

FUNCTION MACHINE OF THE DAY

This time the domain is not numbers, it’s animals. Which animals do you want to put in? The big skill needed here: strategically choosing an input that may result in a different output. It went on for a while.

“Are you not going to tell us the answer?”

No, but Melissa put it in the group’s Google classroom for students to ponder.

You can see from the above images that some students are doodling on the screen, enough that a student who gets distracted by a lot of visual stimulation could struggle. Melissa helped me to come up with some strategies to still enable doodling but keep it either off-screen or much smaller. I’ll be experimenting over the upcoming weeks to find the sweet spot. (Some ideas: Lhianna Boditoro is teaching me how to use Miro boards. Denise Gaskin’s upcoming book on Math Journals is also inspiring.)

Why did I play Odd One Out? The math in that game is compelling, but I also wanted to discuss some interesting Epiminedes history by asking questions and generating conjectures from the students. Conjecturing is a huge skill in math that many students are reluctant to do.

Why didn’t I just use the original problem with Achilles for this paradox of Zeno’s? I hoped that students would feel more ownership in the problem if they had co-written it.

Here’s a fun video depicting the race between Achilles and the tortoise.

Last week we explored Hofstadter’s Formal System the MIU System and the MU Puzzle. Today, let’s develop our own System and Puzzle. What would we need to do to start?

At first some students wanted to work more on the MU puzzle after working on it at home. S had come up with an idea of a way to prove that it’s impossible with the given rules, and asked whether it’s okay within a Formal System to add a rule. (No.) G wanted to revise a rule to make the puzzle solvable. No, we’re going to stick to M-Mode.

What should we do first? Everyone strongly agreed that to make our new system and puzzle that we start with the “objective,” in other words, create the puzzle before making the rules. “This reminds me of a metaphor,” said G, “You can’t make something from nothing.” This prompted a big discussion about how this may apply to painting: you have to choose your tools (Brush? Canvas? Paint? Hands?), which are the axioms, but you don’t have to choose the topic/subject of the art. So maybe choosing the tools is a formal system but choosing the topic is not since you can change your mind easily. But wait, you can change your mind about the tools partway through (i.e. what if Jackson Pollock didn’t like those thrown splotches and decided to pick up a brush?) so maybe even that’s not a formal system. Back to M-mode versus I-mode again. S pointed out that the puzzle might be too easy if we choose it before writing the rules, so the group came up with some goals for the puzzle:

Students proposed some different puzzles within the MIU System. I said let’s create our own system, so students proposed various things to be the “alphabet” of the system: letter, numbers, colors, shapes, trucks, symbols, emojis. Since we were limited in our work tools to sidewalk chalk and cement, everyone agreed colors would be the best alphabet at the moment. They chose the alphabet to contain pink, purple, orange, and green. The puzzle would be to transform pink into purple.

THE AXIOM AND RULES

Then students started proposing rules that would make the transformation from pink to purple (after starting with green) possible. “The Pink-to-Purple Puzzle.” A and S took turns as scribes, writing down the rules with symbols:

Rule #3:    If you have 2 greens, you can transform them into one pink. (At this point in the discussion, everyone agreed that the next rule ought to get purple into a string somehow.)

Rule #4:    If you have 2 oranges, you can transform the first one into a purple. (“That ruins my plan;” said G, when S put this rule on the list. Discussion: one challenge of collaboration, having to adjust.)

Rule #5:    If you have any string that ends with pink, you can add one orange at the end. Discussion: How to notate “any string?” Mathematicians like to cross off instead of erase so you can see rejected work again later if you need it. Can this rule be applied if the string is just one pink? The students said yes since that technically ends with pink. Two students were standing up on their chairs bouncing with hands up, so excited to contribute suggestions for rules at this point. I couldn’t remember whose turn it was to talk, so … pick a number …

Rule #6:    If you have pink then orange, you can transform the pink to purple and add an orange on the end.

(At this point, it was 10:57 and class ends at 11:00. No one could believe how time had flown. So close to a solution. What to do? Most agreed to make up one additional rule that would solve the puzzle.)

Rule #7:    If you have the string purple orange orange, you can drop the two oranges.

“Why do we need all these rules?”

The students crossed off rules 2 and 4, but then reconsidered – they could help achieve the goal of challenge to others. (Missed opportunity here on my part to talk about elegance in math.)

What’s the name of your system?

Students lingered after class, looking at the work, some copying down.  I sent them home with two questions mathematicians would ask

TERMS: I am so excited that the students are using the word “axioms” in conversation! My main goal for today was to use these terms/phrases naturally in conversation, without stating them with definitions:

I even wrote them in my notebook in advance so I could score myself later. I ended up using about half, and one unplanned term: transformation. Now onto using the word “theorem!”

CONSENSUS VERSUS MAJORITY: Three people wanted our alphabet to consist of 4 colors, one wanted 3. Three people wanted an initial axiom of green, one wanted pink. Three people wanted to finish the list of rules and quickly explain verbally how they could be used to solve the puzzle, one wanted to finish the problem next week by formally deriving theorems/strings. And so on. Throughout the session, there was not consensus. My attempts to facilitate consensus might have worked, but it would have taken the whole session since students were very attached to their ideas. I ended up using majority to move forward with the math, but want to move toward consensus going forward.

INDIVIDUAL VERSUS COLLABORATIVE: Each student had their own idea of the exact progression of rules and what they should be, but since we are collaborating, I asked that each person contribute one rule at a time. This made this much more challenging for students.

BITING MY TONGUE: Early in the session, I tried so hard to ask leading questions to get the students to consider making the rules before the puzzle. (They really wanted to make the puzzle before the rules so that they could guarantee that there would be a solution.) Then I bit my tongue, remembering that I want to students to come up with this idea based upon their own work. They later on did briefly bring up how it might have been different had they started with the rules.

AXIOMS: The after-class discussion with a few people who lingered revolved around what exactly is an axiom. (Something we take for granted as true without proving it – Hofstadter calls it something we’re given for free.) This conversation led to the question of why aren’t things like this often taught in school to students or teachers? Which led to me recommending A Mathematician’s Lament, by Paul Lockhart.

MU Puzzle – we will work on this again, as students are excited!